Funerals announced for Pennsylvania state troopers killed in I-95 crash

A funeral Mass for Trooper Mack will take place at 11 a.m. Thursday at St. Michael the Archangel Church.
WPVI
By 6abc Digital Staff 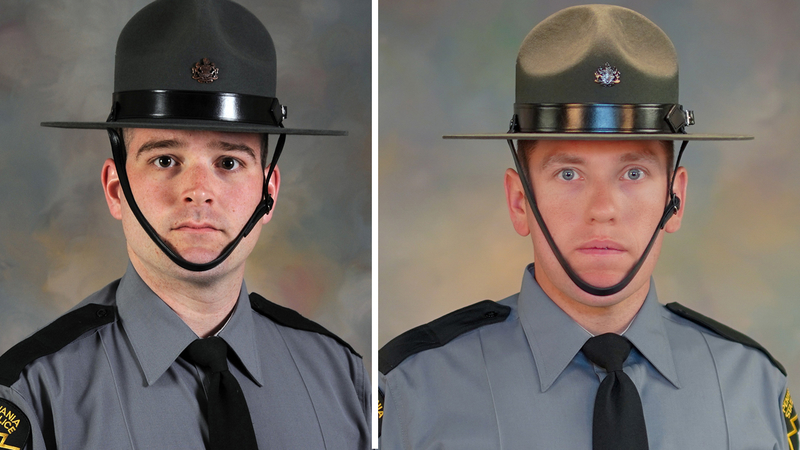 Funeral arrangements set for troopers killed in I-95 crash

PHILADELPHIA (WPVI) -- The funerals for two Pennsylvania state troopers killed by a suspected drunk driver in South Philadelphia will be held next week.

A funeral Mass for Trooper Martin F. Mack III will take place at 11 a.m. Thursday at St. Michael the Archangel Church on Levittown Parkway in Tullytown, according to Rev. Dennis Mooney, pastor of St. Mark Church in Bristol.

A large contingent of law enforcement is expected at the Mass.

Mack, 33, had been on the force since November 2014. He leaves behind a wife and two daughters.

A funeral for Trooper Sisca will be held at Perkiomen Valley High School on Saturday, April 2, at noon

A public viewing is scheduled for Friday, April 1, from noon until 3 p.m. and from 5 p.m. to 9 p.m. at the Boyd-Horrox-Givnish Funeral Home at 200 W. Germantown Pike, Norristown.

Sisca, 29, had been on the force since February 2021. His wife is expecting their firstborn in July.

RELATED: Loved ones remember Pennsylvania state troopers killed in the line of duty

According to state police, Mack and Trooper Branden T. Sisca, 29, were responding to reports of a man walking along I-95 south.
EMBED More News Videos

Authorities said the troopers were helping the pedestrian, who has since been identified as Reyes Rivera Oliveras, 28, of Allentown, into the back of their cruiser. Police said, at that time, the suspect attempted to drive past the scene at a high rate of speed.

Jayana Tanae Webb, 21, of Eagleville, has been charged with third-degree murder, homicide by vehicle while DUI, manslaughter of a law enforcement officer in the second degree, driving under the influence and other related crimes.

Police said Webb's blood-alcohol level at the time of the crash was twice the legal limit.