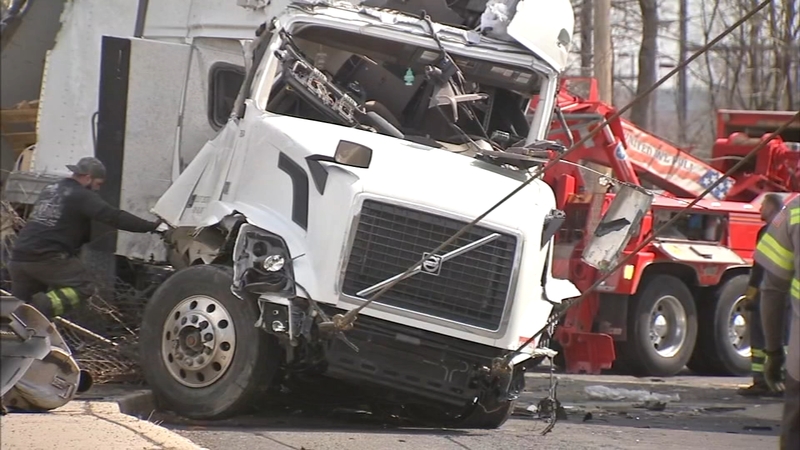 BENSALEM, Pa. (WPVI) -- An 18-wheeler carrying kegs exiting I-95 southbound lost control on an overpass and plunged onto the northbound lanes in Bensalem, Bucks County.

The crash happened around 9 a.m. Tuesday between the Woodhaven Road Street Road exits.

Witnesses say the 18 wheeler was barreling down the Park and Ride exit ramp when the driver lost control of the vehicle. 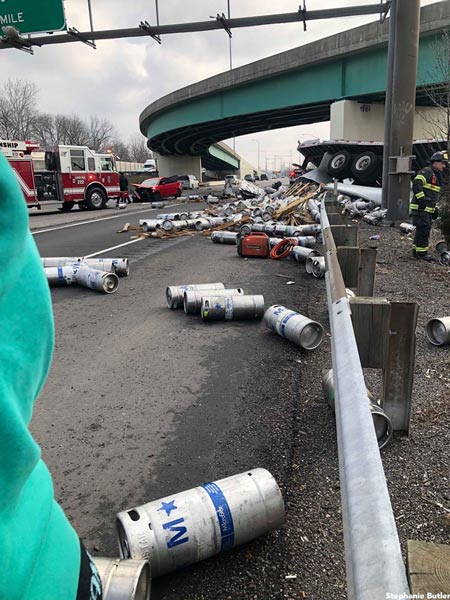 The big rig careened clear over the concrete railing, plunging more than twenty feet onto the northbound lanes of I-95.

The only other vehicle involved was a car traveling north on the highway at the time, which slammed into the wreckage.

At first the trucker was able to walk away from the wreckage and was taken to the hospital for observation. But Action News has learned that the driver is now in critical but stable condition.

The person inside the car was not seriously injured.

Meanwhile, the work continues to cleanup the huge mess the crash left behind. Empty beer kegs from the tractor-trailer were scattered all over the highway.

State police had to shut down I-95 northbound for approximately two hours as cleanup crews got to work.

The big rig was all but destroyed, so once they moved the wreckage off the highway crews had to figure out how to get the pile of metal to the salvage yard.

"We have a trailer that's broken in three or four different places," said Chuck Matthias from Rob's Automotive. "It's un-towable, so we'll have to cut it apart on scene here. But first we have to get it to a safe working place before we can do anything else."

The other factor that slowed down the cleanup effort was the cargo. That 18 wheeler was loaded with empty beer kegs, which despite being empty were still heavy.

I-95 northbound has since reopened.