'I took back my freedom': Teen's statement read as her kidnapper gets life in prison 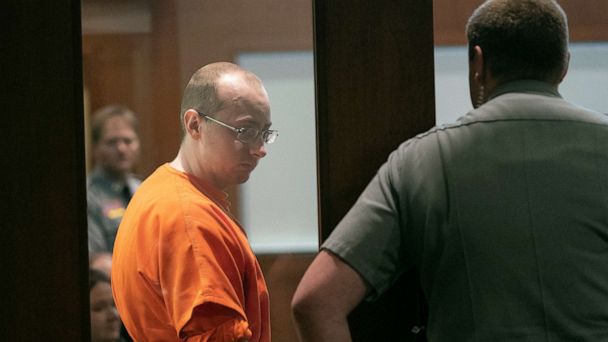 ABCNews
By EMILY SHAPIRO
Jayme Closs vowed to never let her kidnapper take her freedom or her spirit from her in a powerful statement read at the sentencing hearing of Jake Patterson, the 21-year-old Wisconsin man who pleaded guilty to abducting 13-year-old Closs, killing her parents and then holding her captive until she escaped.

"I was smarter," Closs said through a statement read in court on her behalf Friday. "I watched his routine and I took back my freedom. I will always have my freedom and he will not. Jake Patterson can never take my courage. He thought he could control me, but he couldn't."

Patterson pleaded guilty in March to two counts of first-degree intentional homicide for shooting and killing Closs' parents on Oct. 15, 2018, and one count of kidnapping for taking the couple's only child from her home in rural Barron, Wisconsin.

Judge James Nadler on Friday called Patterson "the embodiment of evil" as he sentenced him to life in prison without parole.

Patterson, appearing emotional, told the court that he wish he could "take back what I did. ... I don't care about me, I'm just so sorry."

Closs, in a statement read by an attorney on her behalf Friday, said of Patterson, "I was brave and he was not."

"He can never take away my spirit," she said. "He can't ever change me or take away who I am. He can't stop me from being happy and moving forward with my life. I will go on to do great things in my life and he will not."

Patterson is accused of first gunning down Closs' father, and then shooting and killing Closs' mother at point-bank range in front of the 13-year-old.

"I loved my mom and dad very much... he took them away from me forever," Closs' statement read. "I felt safe in my home and I loved my room and all of my belongings. He took all of that, too. I don't want to even see my home or my stuff because of the memory of that night. My parents and my home were the most important things in my life."

"I have to have an alarm in the house now just so I can sleep," Closs said. "It's too hard for me to go out in public. I get scared and I get anxious."

However, the teen insisted, "Patterson will never have any power over me."

"I feel like I have some power over him because I get to tell the judge what I think should happen to him," her statement read. "For 88 days he tried to steal me and he didn't care who he hurt or who he killed to do that. He should stay locked up forever."

Closs' relatives, including aunt Sue Allard and cousin Lindsey Smith, also spoke in court Friday, urging the judge to sentence Patterson to the maximum for each count.

"My sister and brother-in-law were such loving and giving and beautiful people," Allard said at Friday's sentencing. "It was senseless."

"Oct. 14 was a typical family event with nothing but happiness," said Smith. "We spent the next 88 days living in fear, pain and not knowing what happened to our family."

"On the 88th day we were finally told that Jayme would be coming home," Smith said. "We were so glad that Jayme was home... but you took so much from Jayme. You took her parents, her home, her childhood and all of her happiness."

"You took so much from all of us. You took my aunt and uncle from me," Smith said. "The last moments of my aunt's life were the worst and scariest moments of her life. No one should leave this earth in such a horrible way."

Patterson held Jayme Closs captive in his home in Gordon, Wisconsin, for 88 days, until she escaped on Jan. 10, according to court documents.

Patterson confessed to investigators that he targeted Closs after seeing her board a school bus, according to a criminal complaint.

After Patterson fled with the girl to his home, he created a space for her under his bed. When he would leave the house, he would put barbells and free weights around the bed so she couldn't escape, according to the complaint.

Patterson kept his head down as Jayme Closs' relatives spoke ahead of sentencing. As prosecutors warned the judge that Jayme Closs' life would be in jeopardy if Patterson was ever released, the 21-year-old shook his head.

Patterson's attorney asked the judge that the 21-year-old's sentence include therapy opportunities, stressing the fact that Patterson took responsibility for the crimes when he was arrested and that his decision to plead guilty has spared the community from a lengthy and emotional trial.
Report a correction or typo
Related topics:
abc newsnational
Copyright © 2020 ABC News Internet Ventures.
More Videos
From CNN Newsource affiliates
TOP STORIES