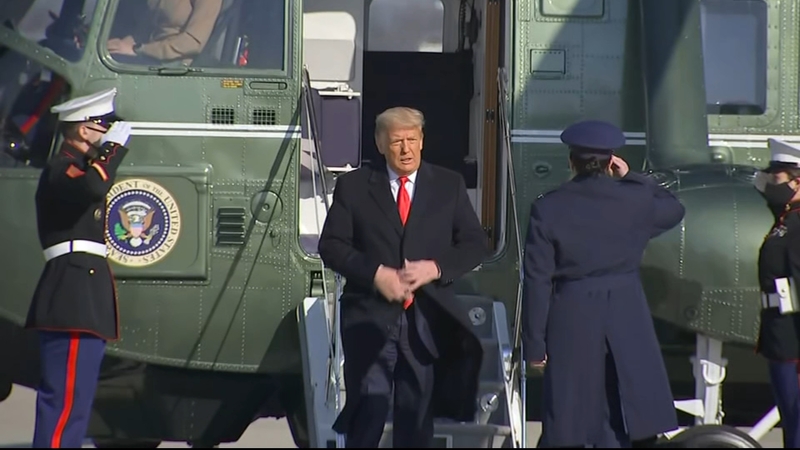 PHILADELPHIA (WPVI) -- President Donald Trump was impeached by the U.S. House for a historic second time Wednesday, charged with "incitement of insurrection" over the deadly mob siege of the Capitol in a swift and stunning collapse of his final days in office.

With the Capitol secured by armed National Guard troops inside and out, the House voted 232-197 to impeach Trump. The proceedings moved at lightning speed, with lawmakers voting just one week after violent pro-Trump loyalists stormed the U.S. Capitol, egged on by the president's calls for them to "fight like hell" against the election results.

Ten Republicans fled Trump, joining Democrats who said he needed to be held accountable and warned ominously of a "clear and present danger" if Congress should leave him unchecked before Democrat Joe Biden's inauguration Jan. 20.

Trump is the only U.S. president to be twice impeached. It was the most bipartisan presidential impeachment in modern times, more so than against Bill Clinton in 1998.

President Donald Trump was in the Oval Office as the House of Representatives voted to impeach him. Trump on Wednesday became the first president to be impeached twice.

"By the time this process would conclude, the man they want out of office will no longer even be the president. If we want unity, this is not the way," said Van Drew.

Democratic members of Congress from the Philadelphia region say their decision was based on the contention that the president incited an insurrection.

"He has endangered this nation. He has betrayed his oath. I do this now for all of us, for our Constitution and for this republic. I do this to tell the world that this great democracy will stand and no one is above the law," said Rep. Chrissy Houlahan (D-PA 6th District).

Bucks County Republican Brian Fitzpatrick (PA 1st District) who, while struggling with the value of impeachment, introduced a resolution to condemn and censure President Trump for his role in last week's attack on the Capitol. He voted against impeaching Trump Wednesday.

"The president's conduct needs to be unequivocally called out and condemned and must be held to account for it, including, you know, if this is taking a criminal investigation route," said Fitzpatrick.

Now, it's in the hands of the U.S. Senate for trial.

The soonest Republican Senate leader Mitch McConnell would start an impeachment trial is next Tuesday, the day before Trump is already set to leave the White House, McConnell's office said. The legislation is also intended to prevent Trump from ever running again.

Pennsylvania Democratic Senator Bob Casey says he believes the Senate should convict President Trump for the danger he presents, not only to national security but also to anyone he deems insufficiently loyal.

"That's the power of his voice with some Americans, to incite them. They came through those doors of the Capitol saying three words, 'Hang Mike Pence,'" said Casey.

It will now be up to the Senate to convict President Trump with a 2/3 majority needed to do so.

With Democrats earning the narrowest of majorities in the Senate, there's no guarantee that will happen.

A New Jersey man is now among the dozens of people facing federal charges after last week's siege of the U.S. Capitol.