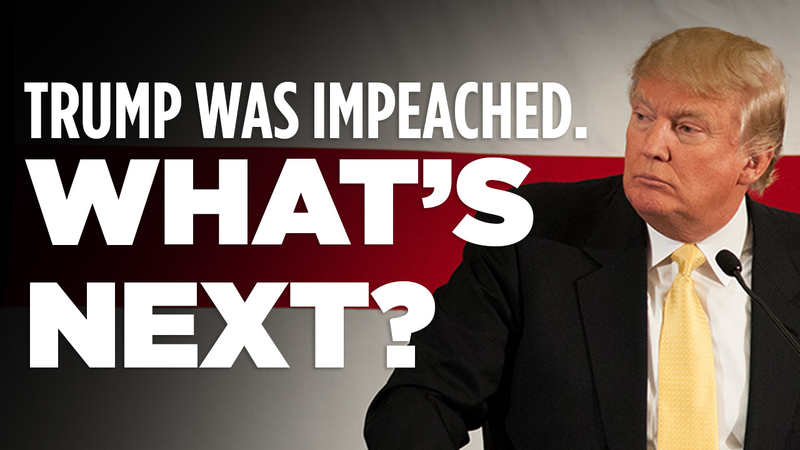 The House of Representatives voted to impeach President Donald Trump on charges that he abused his power and obstructed Congress, making him just the third president to be impeached.

Yet what does this mean for the United States, the president and Congress going forward? Here are some key takeaways:

What does impeachment mean for Trump now?

Even after impeachment, a president can continue to hold office and govern as usual.

The current president, however, has mocked the articles of impeachment as weak.

What happens before the Senate impeachment trial?

Now that the impeachment vote is over, the House must now appoint members to serve as managers who will prosecute the case.

This could happen before the end of the week, and some likely candidates are Rep. Jerrold Nadler, D-N.Y., the Judiciary Committee chairman, Rep. Adam Schiff, D-Calif., a former prosecutor who has been leading the impeachment inquiry, and Republican-turned-independent Rep. Justin Amash of Michigan, a vocal Trump critic.

Meanwhile, Senate Majority Leader Mitch McConnell and Minority Leader Chuck Schumer have begun negotiating, and sniping, over how the trial will be conducted.

Watch the final moments of the second House vote on charges of obstructing Congress.

When is the Senate trial? How long will it last, and who will be there?

The trial, which is mandatory for all impeachments under the constitution, would begin with the House managers reading the articles of impeachment aloud.

Then Supreme Court Chief Justice John Roberts would be sworn in to preside over the trial. Roberts, in turn, would swear in the 100 senators who will promise to "do impartial justice according to the Constitution and laws."

The length of the trial will be determined by McConnell and Schumer. Schumer on Sunday proposed a trial that would begin the week of Jan. 6.

McConnell might favor as short a trial as possible since he has said he sees no chance that Trump could be convicted. Five Democratic senators are running for president, and they may prefer to be elsewhere in January, like the early voting states of Iowa or New Hampshire.

Clinton's impeachment trial, for reference, lasted just over a month.

There's also a possibility a simple majority of the Senate could vote to end the trial quickly.

Some Republicans have talked about calling Joe Biden's son Hunter, as Trump has accused the Bidens of engaging in corrupt dealings in Ukraine.

There is a possibility that Trump will take part in his own trial, but that would be unprecedented. Senate rules call on the person impeached, or a representative, to answer the charges, and White House counsel Pat Cipollone appears to be coordinating Trump's defense.

President Donald Trump was impeached by the U.S. House of Representatives Wednesday night, becoming only the third American chief executive to be formally charged under the Constitution's ultimate remedy for high crimes and misdemeanors.

How does the trial work?

In some respects, a Senate impeachment trial resembles a typical courtroom proceeding with a judge presiding and an unusually large jury of 100 senators. But there are important differences.

For one, it takes a vote of two-thirds of those present (67 out of 100 if everyone is there) to convict and remove the president from office. For another, while senators determine the outcome, they also set the rules for the trial, may ask questions and can be witnesses.

During the trial, the managers are likely to give opening and closing arguments that could last for several days and respond to senators' questions that also could be time-consuming. They also might question any witnesses. Trump's defense team would have equal time to rebut the charges. Each step, as well as the time it takes to reach agreement on the rules, takes days, if not weeks.

Then the Senate deliberates. Whether that's done in private is up to them.

Once a decision has been reached, the Senate meets in open session to vote on each article of impeachment. Senators will stand one by one at their desks and offer their verdict, guilty or not guilty.

What happens if President Trump is convicted?

If Trump is not convicted, the trial ends and he remains in office.

But if he is convicted, the country would enter an unprecedented situation. Trump would be automatically removed from office, and Vice President Mike Pence would become president.

It's not clear how quickly the succession would happen, but the Constitution does not contemplate any gap between a Senate vote to convict and the new president assuming power.