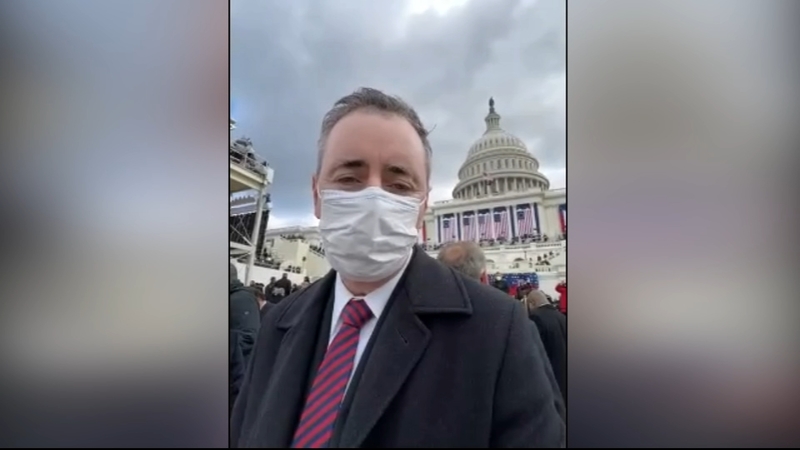 PHILADELPHIA (WPVI) -- Inauguration Day was particularly special for local politicians who got to watch a Delawarean become president.

They reflected on the fact that on Wednesday, at the very location where rioters ransacked the Capitol, we witnessed the peaceful transfer of power.

Congressman Brian Fitzpatrick was kind enough to give us a virtual tour, via his smartphone, of the set-up outside the Capitol before Joe Biden was sworn-in.

The Republican lawmaker saying he looks forward to contending with the many challenges facing our country alongside his colleagues from both sides of the aisle.

"It's my hope that we get a lot of bipartisan accomplishments. There's very, very tight margins both in the House and the Senate and the new administration. So, with every change comes opportunity," Fitzpatrick said.

Representative Madeleine Dean says the tone for that change was actually set the night before the inauguration.

Dean, who lost her mother-in-law to COVID, says seeing both Biden and Harris on the National Mall Tuesday night memorializing the 400,000 American lives lost to the pandemic was something that was long overdue.

"They wanted to acknowledge loss and pain and suffering. Because if we don't acknowledge it we will never get past it. So, it really meant something to me and it really reveals what the path forward is," said Dean.

Meanwhile, Congressman Brendan Boyle admits that the inauguration ceremony made him more emotional than he expected.

Inaugural poet Amanda Gorman summoned images dire and triumphant as she called out to the world "even as we grieved, we grew."

"I thought that when Garth Brooks sang Amazing Grace and all of us who were there, part of a relatively small crowd, were singing along with him, you could've heard a pin drop," Boyle said.

Representative Dwight Evans says seeing so many people of color surrounding the 46th president as he addressed the nation reminded him of the second paragraph of the Declaration of Independence which reads, in part, "All men are created equal."

"It's only through unity can we accomplish anything. So, I believe that was his underlying message. That it will be difficult, but if we are unified, there's not anything we can't do," said Evans.