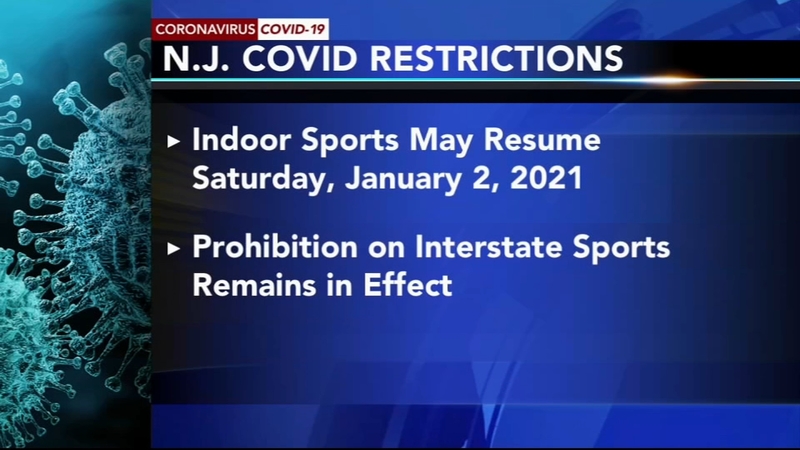 Indoor sports in N.J. to resume in 2021; raises new concerns

The weekly average of new daily cases was rising and had topped 4,000 on the day Murphy suspended winter sports. This week the number was slightly below 4,000. In the last two weeks, the rate of transmission has dropped to .95, the lowest it has been since September.

With the first case of a new, possibly more contagious variant of the coronavirus in the U.S., New Jersey Governor Phil Murphy issued a word of caution Wednesday.

"We're assuming the worst, assuming that it's in our midst," said Murphy.

The new strain, currently wreaking havoc in the U.K., has not been found in the Garden State, but health officials say it wouldn't come as a surprise to see it.

New Jersey participates in what is known as strain surveillance, in which samples are sent to CDC labs for further testing.

So far, nearly 63,000 health care workers and residents of long term care facilities in the first phase of the rollout have been vaccinated.

When asked about vaccine rollout, health officials said the number may appear low, but they say some of the doses just got to health systems around the holiday.

Shots in arms are expected to pick up exponentially in the coming weeks.

"The year 2021 will unquestionably, will be better, but it will not be on day one or even on the first days, weeks, or months," Murphy said.

But, concerns over new virus variant has some fearful of what the new year will bring.

"The only concerns would be if the new strain will make the vaccine useless," said Adriano Martino from Old City.

"It doesn't appear to be more virulent, and it does not appear to have mutated away from the vaccine," said Paul.

Health officials, including Philadelphia's health commissioner, now debate how contagious the new strain may be.

"We also think this new variant should not cause a more serious infection in people who get it, and the new variant should be prevented by the vaccine just like the virus that is circulating in Philadelphia now," said Dr. Thomas Farley.

Back in New Jersey, Murphy reflected on the year that wasn't and the hope for better days ahead.

"This virus has cut a deep scar across countless families, entire communities, and indeed our entire state," Murphy added.