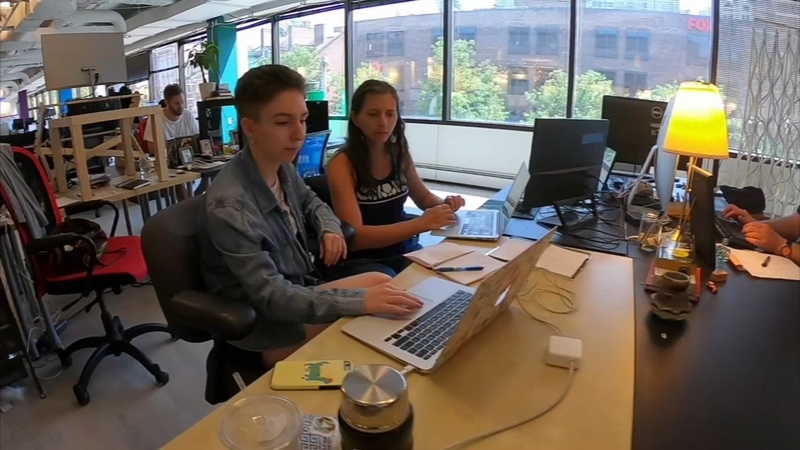 PHILADELPHIA (WPVI) -- The workplace itself is changing too. People are not staying with the same company for their whole career anymore. Many workers are no longer tied to their desk. As workers demand greater flexibility from their bosses, telecommuting has grown more than 150% since 2005, according to an analysis by FlexJobs. In 2017, 3.5% of Philadelphians, or 22,505 people, worked from home.

But a growing portion of people are choosing to join something in between, called coworking spaces.

One of the original, founded 13 years ago, is Indy Hall on Market Street in Old City.

"More and more people are able to work wherever they like," said Alex Hillman, Indy Hall co-founder. "Work and place have been decoupled. So people are starting to rethink 'Well, if I can choose where I work, why wouldn't I choose a place that I like, if I can choose the people I work around? Why wouldn't I choose people that I like?' I think that's a generational thing."

Chris Berkley, a self-employed marketing consultant who utilizes the Indy Hall space, agreed that this is a generational shift and also a change in attitudes about startup culture.

"I think coworking is absolutely a newer thing that's going to become bigger as more people kind of have the ability and the guts to go start their own enterprises."

"Our parent's generation never would have done that," said Berkley, "because they had a corporation they worked for, (they) didn't have these opportunities. They went into the office, the cubicle, whatever it was, and that was it for them."

Hillman says one of the benefits of coworking, especially for millennials, is finding a like-minded cohort and the camaraderie to encourage individuals to stake out their own path in business.

"I also think a lot of folks are kind of disenfranchised with the idea of a path that they were told they would have access to: you go to school, you go to college and get a degree and get a job, you keep that job for 30 years and you retire. That hasn't been true in a while, says Hillman. "And so people are realizing, I need to carve my own path. Why don't I learn from other people who maybe are carving a path, like mine, or maybe it's not like mine, but they still carve their own? When people are first choosing a path, a career path that they actually want, I think it's pretty common to find yourself alone and isolated in your friends and your family saying like 'That's crazy. Why don't you just go get a normal job?' Whereas you walk into this room and everyone's like 'cool, welcome home.' Like, we totally get it."

Jessica DiPonziano, an independent web developer, said that was her experience when choosing to switch careers five years ago from public relations.

"I've always had an interest in it, but never had a way to get there. And you always think 'this is not what my degree is in. I don't even know where to start,'" DiPonziano said. "So my sister actually recommended me to come here because it had a great community of people that can help me out or teach me or make me connections to kind of make that transition happen a lot quicker. And I came here and within six months, I had three different people mentoring me teaching me new things, small companies here throwing me side gigs to see how it worked out. And then before I knew it, here I am years later, a full developer flipping between contract work and full-time jobs, depending on what I want to do."

"And that's what this place really is -- a lot of people come here to start over, they build a new company, they build things, it gets somewhere, they either sell it or decide they don't want to do it anymore. And they come back here knowing that there are people to be inspired by, people they can team up and work with, to kind of start their next venture," DiPonziano continued.

Alyson Showell LaPorta, associate director of nonprofit Inner Strength Foundation, who works on mindfulness and systems-based training for high school students, says the benefits of coworking at Indy Hall are the environment, opportunities and amenities.

"It's just a really comfortable, really inviting environment to work," said Showell LaPorta. "It's a really great atmosphere for learning, for teaching, you can bring your clients here, you can have meetings, there's coffee, there's a kitchen."

"The reality is, is a lot of the folks that end up joining communities like ours don't need an office at all," said Hillman, "They have a home office, or a dining room table or even a coffee shop."

But Showell LaPorta explained that those traditional alternatives are lacking in one key way: "if you do have a home office, you know, sometimes you are actually kind of craving that human interaction and that contact."

DiPonziano agreed: "You know, we're human. We need a home. We need people to connect with."

She says they're not only there for friendship, but also to lean on in times of work hurdles.

"I feel weird going to a coffee shop. Nobody's there to network. Everyone's just there to get out of the house and work. And I can do that at home, sit in silence. So for me, it's very much about having people to connect with. If I get stuck when I'm working on a project I have people to ask. Because when you do work alone it's not like you have fellow coworkers with more experience you can ask if you get stuck."

"It takes out that whole stress of being by yourself because you're with a team, without the drama of a workplace environment," said DiPonziano. "You're part of the community and the minute people can help you out, they pay it forward. And then when you can you pay it forward. And it's just this cyclical process that makes gig work a survivable way to live."
Report a correction or typo
Related topics:
careersold city (philadelphia)philadelphia newsbusinessbuildingitbettertogetherphiladelphiaworkplaceoffice
Copyright © 2022 WPVI-TV. All Rights Reserved.
TOP STORIES
AccuWeather: Winter Storm Watch
Winter hurricane? 'Bombogenesis' explained ahead of weekend storm
Gunman follows woman home after accidental bump at market: Police
17-year-old student fatally shot near Southwest Philly high school
Armed robbers targeting Philadelphia fast-food restaurants
Teen uses hockey stick to save 2 boys from icy Bucks County Lake
Vaccine mandate kicks in for health care workers in Pa., NJ, Del.
Show More
Amy Schneider's historic 'Jeopardy!' run comes to an end
Man spotlights kids doing good deed in viral TikTok video
Kathryn Kates, 'Orange is the New Black' actress, dead at 73
Philadelphia Flyers GM: Will deal Claude Giroux only if he wants out
School district sending some students home early due to staff shortage
More TOP STORIES News