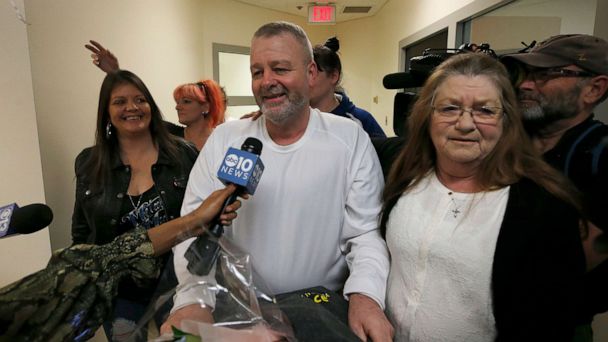 ABCNews
By ELLA TORRES
A California man was freed after spending 15 years in prison for a murder he did not commit, officials said.

Ricky Davis was released Wednesday, one day after a new suspect was arrested in the 1985 murder of 55-year-old Jane Hylton in El Dorado Hills, California, according to El Dorado County District Attorney's Office Vern Pierson, who called the case and the developments "two of the most dramatic extremes" he had ever seen in his 28 years as a prosecutor.

"On one hand, a person, Ricky Davis, was falsely accused, brought to trial, convicted and has spent the last 15-some years in custody for a crime that I can tell you with all confidence he did not commit," Pierson said Thursday. "It's not a matter of we don't have sufficient evidence. He did not commit this crime."

The district attorney said a man who was identified in 1985 by Hylton's then 13-year-old daughter is now in custody.

That man's DNA matched a DNA sample that was tested after Davis was convicted. Genetic genealogy helped create a family profile for that piece of DNA, which then helped identify the suspect, according to officials.

Pierson did not name the man because he allegedly committed the crime when he was a minor, but the Sacramento Bee identified him as 51-year-old Michael Green. Hylton's daughter did tell investigators at the crime scene that she encountered a male named Michael the evening of her mother's murder.

Davis' conviction in 2005 was brought on mainly because of "overly aggressive interrogation techniques" that led to a coerced confession from his then girlfriend, according to the district attorney's office.

In transcripts from the interviews with Davis' girlfriend in 1999, which were posted by the Northern California Innocence Project, an organization that was working to free Davis, a detective appears to urge her to confess.

"The train is coming through right now, and in my experience in law enforcement, the first one to jump on the bandwagon ... always gets the easiest ride," according to the transcript, which was cited by the district attorney's office.

Murder charges were filed against Davis and his then girlfriend, Connie Dahl, testified against him, according to the Northern California Innocence Project.

Davis was found guilty of second-degree murder and sentenced to 16 years to life in state prison. He had always maintained his innocence.

He contacted the Northern California Innocence Project in 2006 and the nonprofit began investigating his case with the cooperation of the El Dorado County District Attorney's Office.

The new piece of evidence that led to Davis' freedom came about in 2014 when DNA test results revealed an unknown male DNA profile that was found on Hylton's nightgown.

Hylton had been stabbed 29 times during the attack and was bitten on her left shoulder. The DNA was found in the area of the bite mark and consistent with DNA that was also found under her nails.

Though Dahl had told investigators that she bit Hylton, the DNA did not support that.

Pierson on Thursday characterized the detectives who initially investigated Hylton's murder as ones who were "seeking a confession as opposed to seeking information."

He said the two detectives that were involved have since been trained on science-based interview techniques.

With the DNA evidence, the Northern California Innocence Project eventually proved that a different outcome would have been reached if the original jury heard the DNA results.

In April 2019, a judge reversed Davis' conviction and a retrial was pending. He remained in custody until Wednesday.

"It's a surreal thing in a sense because, as I said before, I'm not telling you that we can't prove it," Pierson said. "I'm telling you that Ricky Davis was wrongfully convicted."
Report a correction or typo
Related topics:
abc newsnational
Copyright © 2020 ABC News Internet Ventures.
More Videos
From CNN Newsource affiliates
TOP STORIES