James Harden attends first 76ers practice, but won't be in a game until after the All-Star break

Harden will not play in a game until after the All-Star break in order to recover from an injury.
WPVI
By 6abc Digital Staff 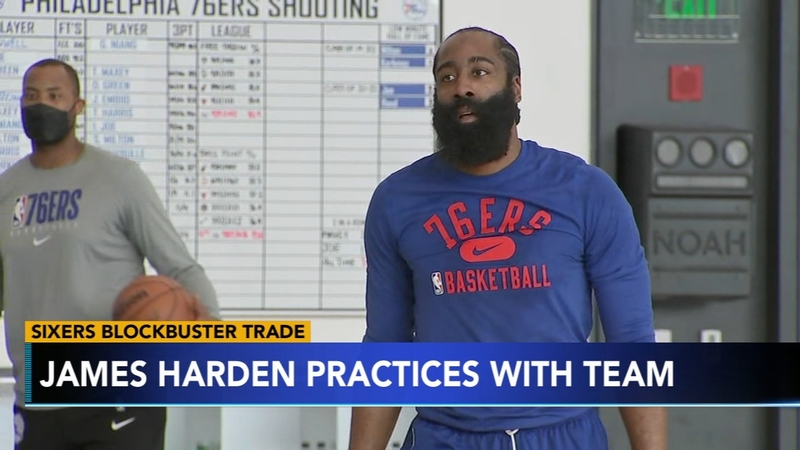 James Harden attends 76ers practice, but no games until after break

PHILADELPHIA (WPVI) -- James Harden practiced with his new teammates at the Philadelphia 76ers facility in Camden, New Jersey for the first time on Monday, but it will be more than a week before we get to see him in a game.

In fact, the team says Harden will not play game until after the All-Star break in order to recover from an injury.

Harden, who is averaging 22.5 points, 10.2 assists, and 8.0 rebounds per game this season, has missed the past week with hamstring tightness.

That means he wouldn't play until at least the Feb. 25 game against Minnesota.

We'll get to hear from Harden much sooner than that, however. He'll be holding a press conference at 12 p.m. Tuesday.

Harden arrived in Philly on Saturday afternoon. He was greeted straight off his private flight with welcoming arms from Sixers' Daryl Morey.

it’s a BEAUTIFUL day in Philadelphia!

The hamstring issue saw him sit out his final three games with the Brooklyn Nets before Thursday's deadline-day blockbuster sent him and veteran big man Paul Millsap to Philadelphia in exchange for Ben Simmons, Seth Curry, Andre Drummond, and a pair of first-round picks.

Harden will eventually share a backcourt with Tyrese Maxey, who said it was surreal that someone he grew up watching is now going to be his teammate.