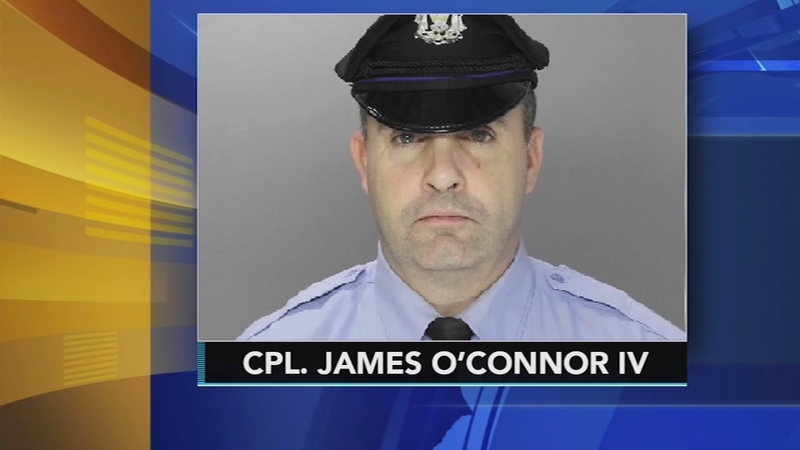 PHILADELPHIA (WPVI) -- The Philadelphia District Attorney's Office has announced murder charges in connection with the line of duty death of a police corporal.

Corporal James O'Connor IV, 46, was gunned down in the city's Frankford section on the morning of March 13.

The suspect was being sought for a homicide that occurred in 2019, Philadelphia Police Commissioner Danielle Outlaw said. The suspect was identified as 22-year-old Hassan Elliott.

Officers entered the property and were met with gunfire from a closed-door on the second floor.

A Philadelphia police SWAT corporal was killed in a shooting on Friday morning in the Frankford section of the city.

According to the district attorney's office, Hassan Elliott, Khalif Sears, Bilal Mitchell and Sherman Easterling were in a bedroom of the second floor when shots were fired from behind the walls and closed door of the home. The shots were fired before officers were able to enter the residence. Corporal O'Connor was in the line of fire and fatally wounded by those shots.

Sears and a male resident of the unit were wounded as SWAT returned fire. All four men were taken into custody.

Elliott and Sears are being charged with murder and held without bail.

Mitchell is charged with possession with intent to distribute for 59 vials of crack cocaine found on him last Friday.

Easterling has been transported to state prison on a VOP detainer.

The district attorney's office says 10 firearms have been recovered by police from the room where the gunfire started, including a 22-caliber assault rifle that is forensically confirmed to be the weapon used to kill Corporal O'Connor. Twenty-one bullets were fired on the SWAT team.

"Elliott and Sears have been wanted, dangerous fugitives for nearly one year. Our police officers put the safety of the public before their own lives, and in the course of performing their duties in order to bring dangerous individuals into custody, Corporal O'Connor was lost to us forever. We all owe Corporal O'Connor and his family a debt of gratitude. Tragically, we will never be able to repay," District Attorney Krasner said.

The district attorney's office released this timeline on what led to Elliott's arrest warrant and O'Connor fatal shooting:

6/8/2017: Elliott, then 18 years old, is arrested for drug possession and possession of a firearm without a license. During 2018 the DAO succeeds in obtaining his guilty plea and a 9-23 month sentence of incarceration plus 3 years of probation. The sentence is well within Pennsylvania Sentencing Guidelines and approved by the Court. He is released on parole.

2/6/2019: Elliott appears in court for a violation of parole (VOP) hearing. Court grants continuance because PPD seizure analysis of substance found is not yet available. Court does not issue a detainer and instead directs him to appear in his next court date.

3/1/2019: Elliott appears again in court for VOP hearing. Court does not issue detainer to hold him.

3/1/2019: Elliott and Sears allegedly commit a robbery and murder on the 53KK block of Duffield Street.

4/3/2019: Elliott fails to appear for the 1/29/2019 drug possession case. Based in part upon a notification by the U.S. Attorney's Office from early 2018 that an arresting officer in the drug possession case has admitted to providing false testimony, and based on the U.S. Attorney's referral of that officer to the DAO for consideration of pursuing perjury charges against the officer, DAO withdraws drug possession charges. Case is also fatally flawed because the police actions described, credible or not, violate the Fourth Amendment and will result in suppression of evidence and dismissal of the case. Elliott is still being actively sought by PPD on the murder arrest warrant approved on 3/26/2019, which is far more serious.

2/2/2020: A music video featuring Elliott and Sears that appears to have been filmed on the 16XX block of Bridge Street is uploaded to YouTube.

3/13/2020: Police Homicide Fugitive Squad and SWAT unit of six officers attempt to execute the fugitive warrant on Elliott to bring him into custody for the 2019 murder on the 16XX block of Bridge Street. Corporal O'Connor is fatally wounded during an exchange of gunfire.
Authorities are expected to file more charges pending more evidence testing.

"This investigation is early and ongoing. In addition to serious criminal justice actions the three other individuals in custody already face, forensic evidence and witness testimony could enable the DAO to file additional charges for their roles in the Friday incident," Krasner added.