Jay Gruden prefers if Carson Wentz went to the Browns 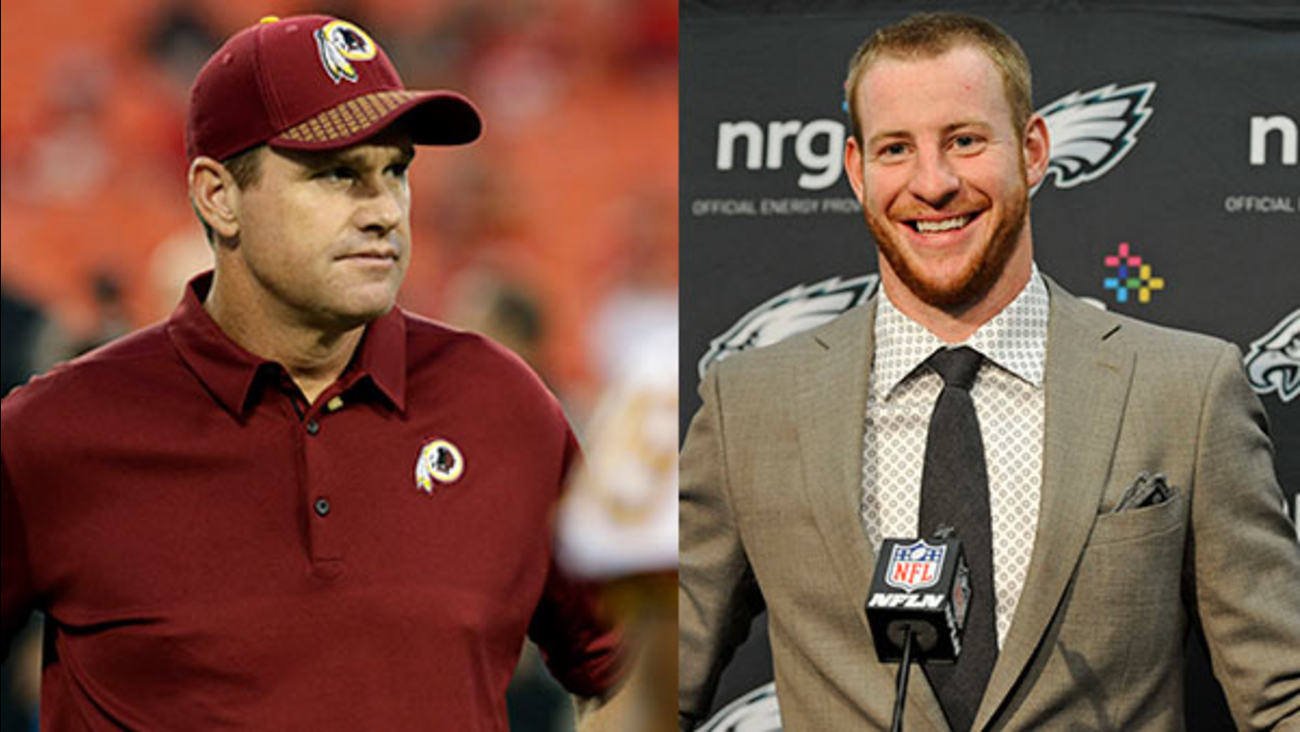 PHILADELPHIA -- Jay Gruden would rather coach against Carson Wentz once every four years instead of twice each season.

He can blame the Cleveland Browns.

When the Browns traded the No. 2 pick in the 2016 draft to Philadelphia for a slew of draft picks, the Eagles selected Wentz. He's been the franchise quarterback they expected.

Wentz has started every game since his arrival, going 12-10. The Eagles (5-1) lead the NFC East and are first in the conference entering Monday night's game against Gruden and the Washington Redskins (3-2).

"I think he's progressed at a rate as fast as anybody I've seen really," Gruden said about Wentz. "His ability to make plays in the pocket, his ability to stay in the pocket in the face of a rush and still deliver balls accurately, his command of the offense."

Wentz is one of the favorites to win the NFL MVP award, according to oddsmakers. Meanwhile, the Browns are 1-21 since the trade and have used five starting quarterbacks.

That's Cleveland's problem. But it bothers Gruden, too.

"I think he's already proven this short in his career that he's one of the top quarterbacks in the league, quite frankly, and he's going to be for a long time," Gruden said. "And I don't know how he got to Philadelphia. And I'm very upset about that."

The Redskins beat the Eagles twice last season, but Wentz led Philadelphia to a 30-17 win at Washington in Week 1. His magic act to escape a sack and toss a 58-yard touchdown pass to Nelson Agholor on the opening series set the tone for the success he's having.

"Every week it seems like we're playing against an excellent quarterback, and knowing that Wentz is going to be there for a long period of time just puts a few more gray hairs on my head," Gruden said. "But love the competition, and it's our job to get after him and make him uncomfortable."

Wentz and the Eagles are well ahead of schedule. They weren't expected to be serious contenders until next season. But Wentz has taken a giant leap from his rookie season and his teammates have jumped on board.

"When we're sitting where we're at right now, we can just never let that slip," Wentz said. "We can never let that slip from our preparation in the film room, the meeting room, the weight room, in practice, so that's just something I feel like we have to always keep focusing on. Never settle, never settle, and just keep striving for that greatness."

The Eagles can't get carried away with early success. They learned the hard way last season. Wentz led them to a 3-0 start. Then came a bye and nine losses in the next 11 games.

"We're made different this year," Wentz said. "We have a different character make-up in that locker room, and nobody's going to ever settle for anything less than greatness. So we're going to go out there every day and attack it."

The Redskins have no slouch at quarterback, either. Kirk Cousins has completed 66.5 percent of his passes for 1,334 yards, nine TDs, two interceptions and a passer rating of 106.4.

Unlike Wentz, Cousins doesn't have job security. He's playing a second consecutive season on the franchise tag and faces uncertainty next spring.

"I have a lot of respect for him in this: he wasn't a first-round draft pick," Eagles defensive coordinator Jim Schwartz said. "He earned his way in. He earned his way into a starting position, and he kept it, and he's produced when he's been on the field.

"He's made plays with his arm. He's made plays with his leg. He's a smart player. He puts them in good positions. They have a lot of checks at the line of scrimmage. Most teams do now, but he does a good job of controlling the run game. He's a good quarterback."
------
Send a breaking news alert to Action News
Report a correction or typo
Learn more about the 6abc family of apps
Related topics:
sportsaction news sports
Copyright © 2022 by The Associated Press. All Rights Reserved.
TOP STORIES
Vigil held for mother killed in hit-and-run; suspects sought
1 dead, 2 injured after convenience store shootings
Local Ukrainian community reacts to threat of war in country
5 tax changes that can boost your refund this year
1 dead, 4 injured after driver crashes into utility pole in Montco
AccuWeather: Seasonably Chilly Monday
Fauci optimistic omicron will peak in February
Show More
Truck driver crashes into van during police chase
Fire on roof sends smoke billowing over Center City
Gamers raise thousands for CHOP during 24-hour marathon
US draws down Ukraine embassy presence as war fears mount
Goats help recycle Christmas trees in Philadelphia
More TOP STORIES News