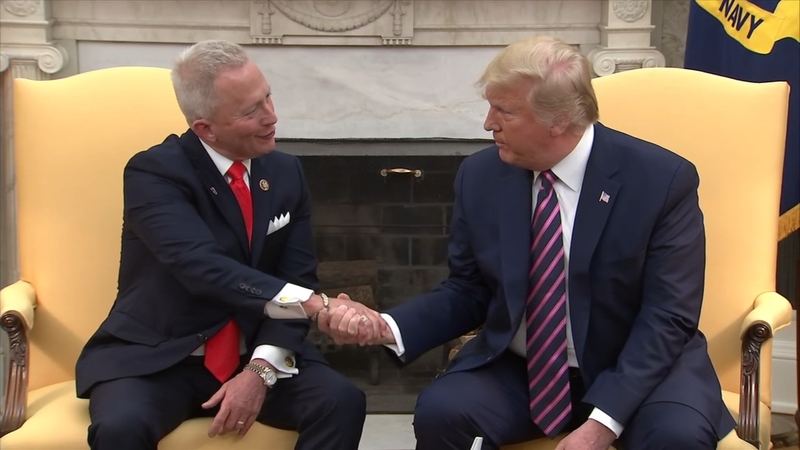 President Donald Trump announced Thursday that Rep. Jeff Van Drew, a New Jersey Democrat who broke with his party to vote against Trump's impeachment, is becoming a Republican.

"Jeff will be joining the Republican Party," Trump announced during an Oval Office appearance with Van Drew, who told his staff over the weekend that he would become a Republican.

Van Drew on Wednesday voted against the articles of impeachment as a Democrat, a move that aided GOP attempts to depict Democrats as divided on the matter while Republicans voted unanimously against impeachment.

"I believe that this is just a better fit for me," Van Drew said of joining the GOP. Trump announced that he is endorsing Van Drew for reelection, calling him "a tremendous asset for the party."

House Speaker Nancy Pelosi said Thursday she had not had conversations with Van Drew about his thinking. Asked by reporters whether she had advice for him, she said, "nothing. Zero."

The 66-year-old was a conservative state senator before he joined Congress, bucking Democrats on issues including gun control and gay marriage. His district has become increasingly conservative, with Trump carrying it narrowly in 2016 after Barack Obama won it in 2008 and 2012.

"Congressman Jeff Van Drew is very popular in our great and very united Republican Party," the president wrote. "It was a tribute to him that he was able to win his heavily Republican district as a Democrat. People like that are not easily replaceable!"

"I've told him many times he's more than welcome to join the Republican Party," McCarthy said. Asked if he's offered Van Drew assistance in getting a committee assignment or hiring staff, McCarthy said, "I'll help him with whatever he needs."

Over the weekend, at least six of Van Drew's staffers resigned amid the party switch.