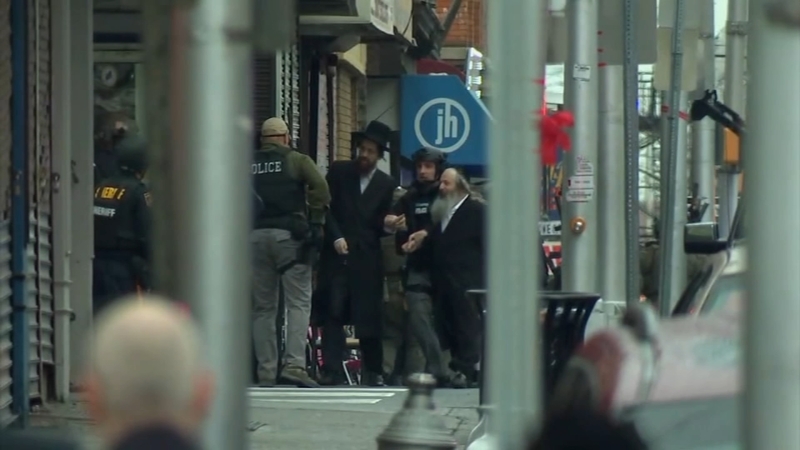 JERSEY CITY, New Jersey -- The mayor of a New Jersey city said Wednesday that gunmen targeted a kosher market during a shooting in an apparent anti-Semitic attack. Six were killed, including a police officer, three bystanders and two suspects.

The furious shooting filled the streets of Jersey City with the sounds of heavy gunfire for hours, keeping the city's 30,000 students locked down in their schools until the situation was resolved.

Mayor Steven Fulop refused to call it an anti-Semitic attack but said surveillance video showed the gunmen driving slowly through the city's streets and then stopping outside a kosher grocery store, where they calmly got out of a stolen U-Haul and immediately opened fire. According to multiple law enforcement officials, a device found in the back of the U-Haul proved to be an operable explosive device, a pipe bomb. Also in the rental van were notes with religious writings.

I’m Jewish and proud to live in a community like #JerseyCity that has always welcomed everyone. It is the home of #EllisIsland and has always been the golden door to America. Hate and anti-semitism have never had a place here in JC and will never have a place in our city,

The shooting began near a cemetery, where Detective Joseph Seals, a 40-year-old member of a unit devoted to taking illegal guns off the street, was killed while trying to stop "bad guys," Police Chief Michael Kelly said without elaborating.

The suspects are identified as 47-year-old David Anderson and 50-year-old Francine Graham, per law enforcement sources, believed to be followers of the Black Israelites, a group that espouses hatred toward Jews. The group is also known for anti-government and anti-police sentiments.

Officials also told ABC News that at least one suspect had posted anti-Semitic statements online fairly recently. It is unknown if this is directly connected to Tuesday's shooting.

The focus now is on the investigation, and with many unanswered questions, crime scene investigators were still working to piece together exactly what unfolded, as cameras got the first look inside the store where the hours-long incident ended.

New Jersey authorities are preliminarily investigating the incident as a case of domestic terrorism.

The President of the United Jewish Organizations of Williamsburg and North Brooklyn identified the two Orthodox Jewish victims in the supermarket as 24-year-old Moshe Deutsch and 33-year-old mother of five Mindel Ferencz.

The third victim found inside the JC Kosher Supermarket on Martin Luther King Drive has not been identified, nor have the two suspects.