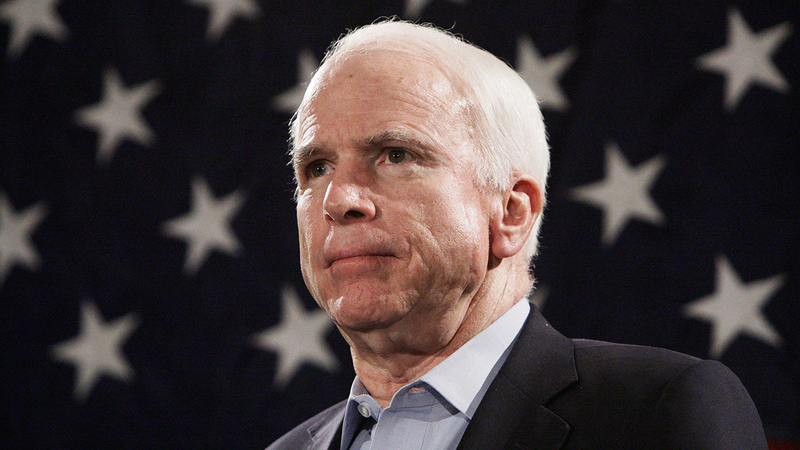 WASHINGTON -- John McCain, the six-term Arizona senator and 2008 Republican presidential nominee, died Saturday at the age of 81, more than a year after he was diagnosed with glioblastoma, an aggressive form of brain cancer.


McCain's condition worsened last fall and he had been in Arizona since December. McCain was a long-term survivor of melanoma, a deadly skin cancer. Doctors classified his brain cancer as a "primary tumor," meaning it wasn't related to his former malignancies.

McCain ran unsuccessfully for the Republican presidential nomination in 2000, then won it in 2008 before losing the general election to then-Sen. Barack Obama.

He returned to the Senate, determined not to be defined by a failed presidential campaign in which his reputation as a maverick had faded.

When Republicans took control of the Senate in 2015, McCain, the scion in a decorated military family, embraced his new influence as chairman of the Senate Armed Services Committee, pushing for aggressive U.S. military intervention overseas and eager to contribute to "defeating the forces of radical Islam that want to destroy America."

Asked how he wanted to be remembered, McCain said simply: "That I made a major contribution to the defense of the nation."


He was a frequent target of criticism from President Donald Trump, especially for his vote against a Republican replacement for "Obamacare," the health care law approved under President Barack Obama.

Trump signed a military policy bill in August named for McCain, but in a sign of their testy relationship, the president made no mention of McCain's name in remarks at a signing ceremony.

The senator had been away from the Capitol since December. Republican Arizona Gov. Doug Ducey will name a replacement to serve out the remainder of McCain's term - through the 2020 election. The GOP currently holds a bare 51-49 Senate majority.

McCain was married twice, most recently to Cindy McCain in 1980. He had seven children (both adopted and biological) from his two marriages, including daughter Meghan McCain, a prominent political commentator and co-host of "The View." He is also survived by his 106-year-old mother, Roberta McCain.