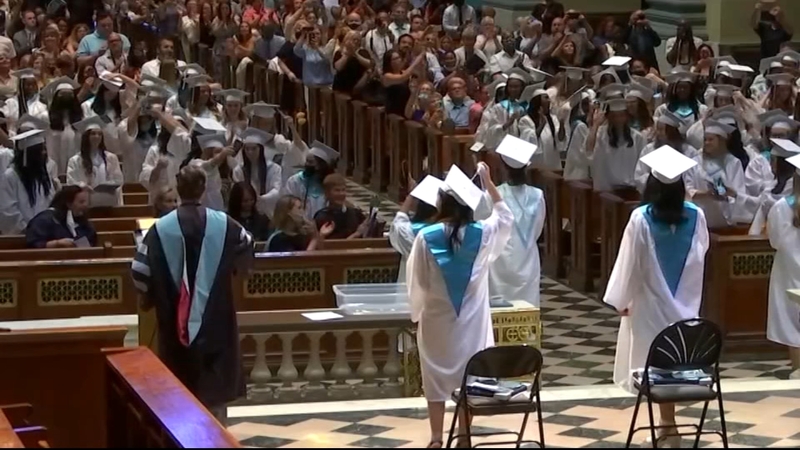 PHILADELPHIA (WPVI) -- It was a bittersweet commencement ceremony Monday for the last graduates of John W. Hallahan Catholic Girls' High School in Philadelphia.

The Archdiocese of Philadelphia made the decision to close the country's first Catholic girl's school in May due to low enrollment and tight finances.

For both graduates and generations of alumni, the graduation at the Cathedral Basilica of Saints Peter and Paul marked the end of an era.

"These are all my sisters and they'll be my family forever," cried graduate Isabella Croscill. "This is the best school ever and I can't believe it's closing."

The three-hour ceremony, which started with a mass, included one last verse, one last prayer and some final words of advice.

It's a long-standing tradition for a Spring Garden High School: the graduating seniors jumping in the Swan Memorial Fountain in Logan Circle.

After 110 years of education, 70 graduates received their diplomas as the last class to do so.

As graduates flowed outside the cathedral doors, there were several cheers and some tears. Graduates took lots of pictures of the historical moment as they reminisced on lasting friendships.

"I feel like this is a celebration that's lasted hundreds of years. I mean this sisterhood goes beyond the building," said graduate Zoey Kelly.

The strong legacy also spoke to alumni groups like the trio known as the Golden Girls, who showed up to celebrate the 50-year anniversary of their graduation.

"We've been friends since first grade," alumna Kathleen McGovern Bobadilla said. "So we've been together for 62 years and we still get together. It's a bond."

There is a new push by the group to create a new school. It would be named after Hallahan's foundress, and be called Mary Hallahan McMichan Academy.

There is a group called the Friends of Hallahan, which formed to keep the school's rich legacy alive. They want to start a new school but the plans on where that stands remain unclear.