Local cheerleaders give back to less fortunate for Thanksgiving 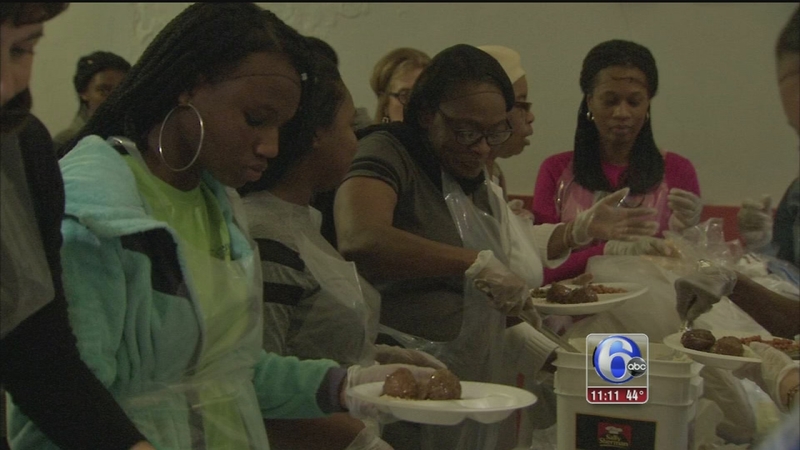 SPRING GARDEN (WPVI) -- The first thing you need to know about the Juniata Thundercats Cheerleaders is they are fierce!

And in two weeks they'll be in Disney World competing for the Pop Warner National Cheer & Dance Championship. Last year, the team placed 5th in the nation.

On Wednesday night, instead of practicing their routines, the Thundercats all showed up at the Chosen 300 Ministries in Spring Garden to serve Thanksgiving meals to the poor and homeless.

"It's about giving back, and Thanksgiving is also being thankful for what you have and who you have to share it with," said Alize Rivera.

The coaches say winning championships is great, but that's not the point. They say the point is taking young people and teaching them how to be caring, giving young ladies.

And so, members of the coaching staff say when the girls were offered the opportunity to trade in a night of practice to feed people in need they jumped at the chance.

Officials from the Chosen 300 tell us these girls are setting an extraordinary example.

"They're not just in it to win for themselves, but also to win by giving back in service," said Shandai Jenkins of Chosen 300 Ministries. "So looking at their hearts it really does show that they're true champions to not forget the poor."

Coach Robinson says he could not be any prouder of his team.

"Our girls are always trying to find ways to help out in the community," he said. "They work hard in school, they're A-and-B students and they're hard-working, young ladies."

"People help us so why can't we help other people too?" said Rivera.

The Thundercats leave for Florida on Dec. 7 to compete for the national championship the following day.