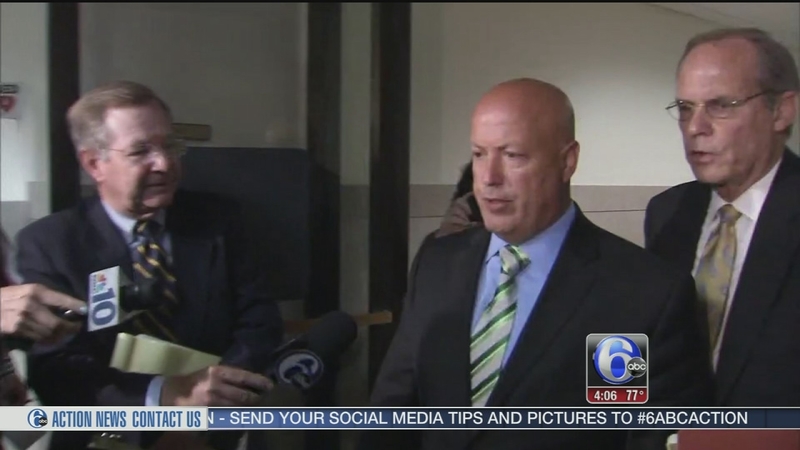 NORRISTOWN, Pa. -- A former small-town police chief who became one of Pennsylvania Attorney General Kathleen Kane's closest confidants pleaded not guilty Tuesday to a charge he snooped on emails to help her keep tabs on a grand jury investigation that has threatened to end her career.

Patrick Reese, 47, had no comment as he left a suburban Philadelphia courtroom surrounded by cameras and reporters after his arraignment on a contempt charge. He was released on $5,000 unsecured bond pending a Sept. 9 trial before the judge whose protective order he allegedly violated.

The former Dunmore police chief is accused of accessing emails in an attorney general's office archival system to keep Kane informed about the grand jury investigation that resulted in criminal charges against her last week. Judge William Carpenter had ordered Kane and her staff to stay out of the case.

"He did searches and queries that related to the case and to the protective order," Montgomery County First Assistant District Attorney Kevin Steele said after the arraignment.

Reese, a supervisory special agent in charge of Kane's security detail and her chief driver, was one of a small number of aides who had access to the email system, prosecutors said.

Employees in the office referred to Reese as the "chief of staff" and saw him as a "go-between" when trying to deal with Kane, according to court papers.

He faces up to six months in jail if convicted.

Reese's lawyer, William Fetterhoff, said he has advised his client not to speak about the case with co-workers who may be witnesses against him or Kane.

Prosecutors say Reese has refused to cooperate with them.

Kane, 49, did not enter a plea at her arraignment Saturday on a felony count of perjury and other charges.

She is accused of leaking secret grand jury information to a reporter in an attempt to embarrass a former prosecutor who she believed had made her look bad, and then lying about her actions under oath.

Kane is the first woman and first Democrat elected attorney general in Pennsylvania. She has denied any wrongdoing and has refused calls to step down, including from Democratic Gov. Tom Wolf.

Kane is expected to address the case at a news conference Wednesday.

Citizen activist Gene Stilp filed a complaint Tuesday with a state disciplinary board seeking to suspend Kane's law license and force her to step down as attorney general. Kane could remain attorney general during the 10 days she would have to fight a suspension.

The state constitution requires the attorney general to hold a law license.

Prosecutors say Kane instructed Reese and another aide, who has not been charged, to comb through employee emails while a grand jury was investigating allegations she leaked confidential material used in a June 2014 Philadelphia Daily News article about a previous investigation.

After witnesses reported being subjected to intimidation as they arrived to testify, Carpenter issued an order in August 2014 directing Kane and her employees to stay out of the case.

Days later, prosecutors said, Reese was scouring the archival system for emails referencing the grand jury investigation. He allegedly searched for terms such as "subpoenas," ''transcripts," ''perjury" and "removal from office," and checked for messages to and from reporters covering the investigation and the supervising judge.