It's time to have an African American woman support us in the Supreme Court," said NAACP President Catherine Hicks.
WPVI
By TaRhonda Thomas 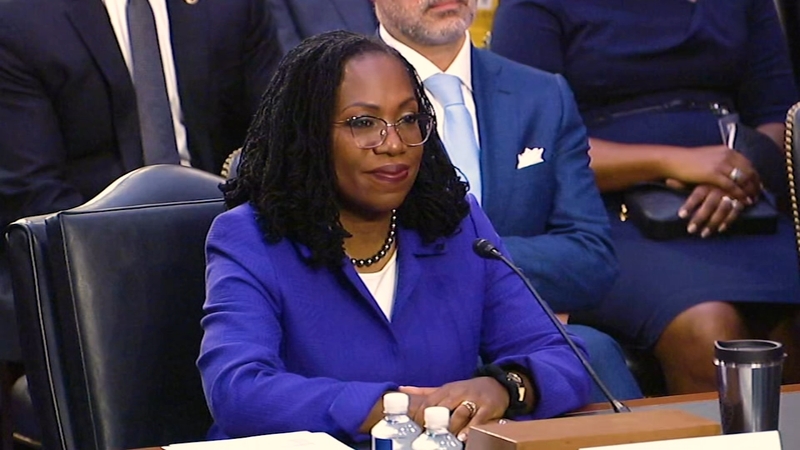 PHILADELPHIA (WPVI) -- Catherine Hicks had a better portion of her Monday planned around one thing: the Senate confirmation hearing of Judge Ketanji Brown Jackson.

"We are so proud that this nomination is happening. It's time to have an African American woman support us in the Supreme Court," said Hicks.

As president of the NAACP's Philadelphia branch, Hicks was one of many NAACP officials and members watching across the country. The organization is holding virtual viewing events in support of Jackson, who could become the first African American woman to serve on the Supreme Court.

"This is not normal, it's never happened before," said Sen. Corey Booker (D-NJ). "The Senate is poised to break another barrier."

The Senate Confirmation Hearing began Monday morning with opening statements from both Republicans and Democrats on the committee.

It also included a 10-minute statement from Jackson, who began by acknowledging her family members including her parents, brother, husband, in-laws and two daughters for whom she shared a special message.

"I hope that you've seen with hard, work, determination and love, it can be done," said Jackson to her daughters in her speech.

Jackson currently sits on the nation's second-highest court: the U.S. Court of Appeals. She's no stranger to the Senate confirmation process. She's gone through it three times, already. If confirmed, she'd be the only Supreme Court Justice to have served as a federal public defender.

Jackson could be confirmed with a simple democratic majority. But even that won't shield her from tough questioning, which Republicans hinted they'll ask.

"(People say) we're all racist if we ask hard questions. It's not gonna fly with us," said Sen. Lindsey Graham (R - SC). "It's not gonna matter a bit to any of us. We're going to ask you what we think you need to be asked. Senator Holly, you need to ask her about her record as a district court judge."

"I'm confident the American people will see through these attacks and any other last-minute attempts to derail your confirmation," said Sen. Dick Durbin (D-IL) addressing his comment to Jackson.

To show their support, members of the NAACP Philadelphia branch will gather Saturday at 11 a.m. at City Hall near the Harriet Tubman statue. They're inviting women to come to the rally in support of Jackson's nomination. The hope is that at least 1,000 women will attend.

Jackson said she respects the detailed questioning that senators have laid out. She said she has met with 45 Senators so far.

Tuesday, senators will begin questioning Jackson. That questioning will last for two days. Democrats hope to have the confirmation process done by mid-April.