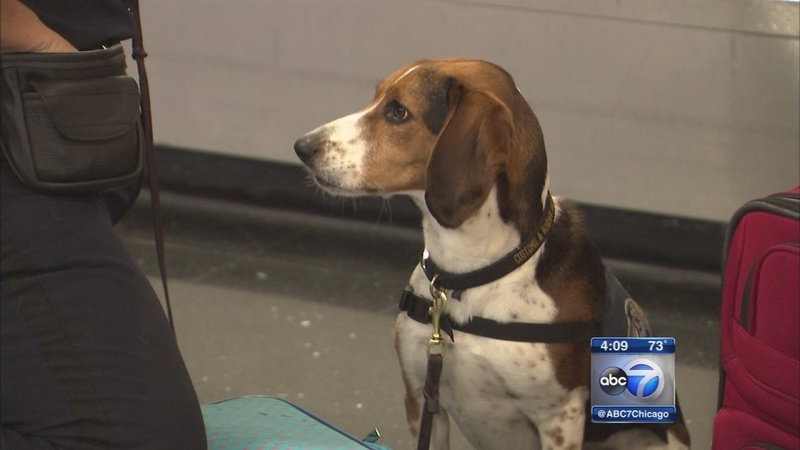 CHICAGO -- A hero dog discovered potentially destructive bugs in luggage at O'Hare International Airport. Khapra beetles are considered to be some of the world's most destructive pests.


K9 agent Emeril was back on the job Thursday at O'Hare after making the find of his young lifetime.

Federal inspectors said the 3-year-old beagle/coonhound mix and his handler found the destructive Khapra beetle inside undeclared food items packed in the carry-on bag of a passenger traveling from India last week.

"It's a big find. The Khapra beetle, we don't find that every day, and it's kind of the Holy Grail of pests when it comes to our job," said Katy Houlmont, agricultural specialist.

Entomologists say the Khapra beetle, which originated in South Asia, destroys grains, cereals and stored foods. It's dangerous because it can tolerate insecticides and survive for long periods without food.

"On a worldwide level, this is one of the top 10 worst in most countries' playbook," said Mark Grzeszkowiak, U.S. Customs and Border Protection.

The big find was made in Terminal 5 for the second time in a month. On June 27, the bug was found in the luggage of a traveler from Iraq. U.S. Customs officials say the public is in no danger.

"There's many items that are prohibited in order for us to protect our agriculture resources in the United States," Piccirrilli said.