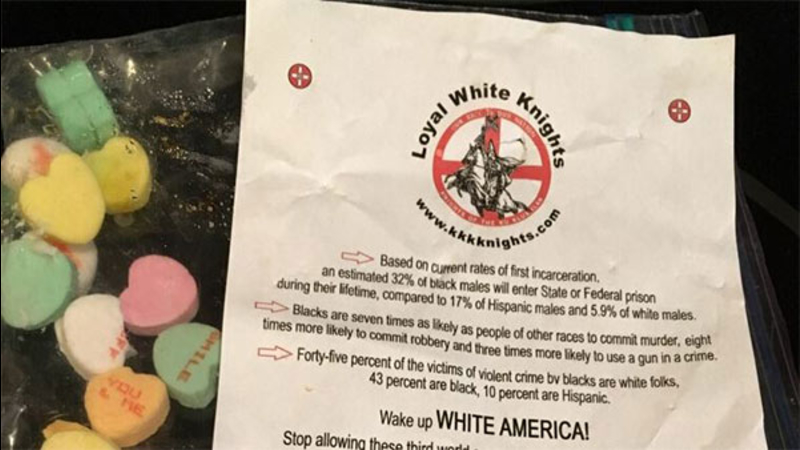 HATBORO, Pa. (WPVI) -- Hatboro residents expressed shock and dismay at racist flyers found in their driveways this past weekend.

Neighbors who discovered the flyers said plastic baggies with heart candies were attached.

They said the message on the flyers, telling "white America to wake up," appears to be from the Loyal White Knights a North Carolina group affiliated with the KKK.

Irene Ford said she was disgusted and disturbed.

"The message is whites are great and blacks aren't anything," she said. "It's unsettling because I am an elementary school teacher and all people are equal in my eyes."

Rick Woywod also received the flyer and immediately threw it in the trash.

"There are all kinds of wackos," he said. "You never know what is going to land in your driveway. It's disappointing that mentality is still out there."

Hatboro police addressed the issue on its Facebook page:

"Several homeowners this morning woke up to find leaflets littering their driveways. The baggies contained hateful literature promoting intolerance, hatred and bigotry. This was done in the the middle of the night and under the cover of darkness. The discovery of these leaflets is not exclusive to Hatboro. Similar bags have been found in Upper Moreland and Upper Dublin over the past several months. Hatboro is a community where we respect each other and we are better than hatred. #hatehasnohomeinhatboro."

As the police mentioned, the flyers were found in several other neighborhoods and townships.