'Do not be afraid to dream': Kobe Bryant speaks to students in West Philadelphia 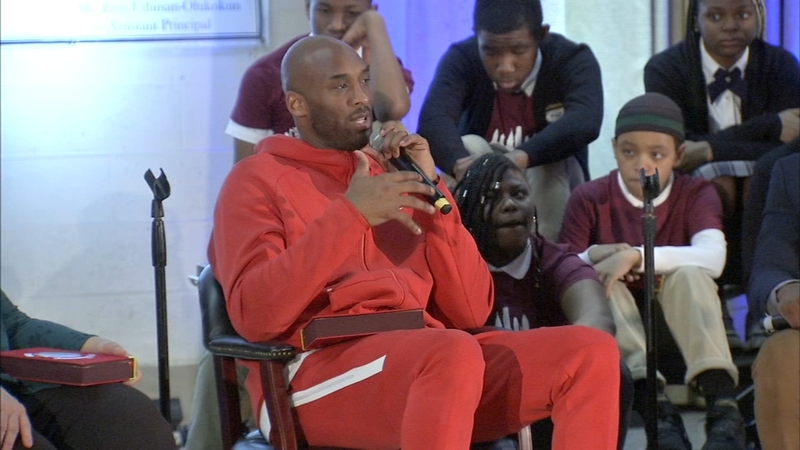 WEST PHILADELPHIA (WPVI) -- NBA legend and former Lakers star Kobe Bryant was met with cheers and applause as he took the stage at Andrew Hamilton School in West Philadelphia on Thursday.

He spoke to a room full of middle school students about his new book "The Wizenard Series: Training Camp," which follows a basketball team as they get to know their new coach, who Bryant said he modeled after the character of Mary Poppins.

"Her character and where she came from in the world and I thought it would be pretty cool to have a coach like that and I thought wait I did have coaches like that," he said.

One of those coaches was on stage with him along with his high school English teacher who regaled a story of a young Bryant being sought after for autographs following a class trip.

"She almost gave me a detention for signing autographs! It was this close," Bryant said.

Bryant talked about how hard it was moving from Italy, where his dad played professional basketball, to Philadelphia during his 8th grade year.

"I wore weird stuff, I had a weird haircut, I don't know what the heck was going on right, so the hardest part for me was fitting in," he said.

He said, like the characters in his book, he used basketball to forge relationships.

Now that professional basketball is behind him, Bryant said he's focusing on being a dad and teaching the next generation.

"It's moving from that hero's journey to be more of a mentor from Luke Skywalker to Obi-Wan Kenobi," he said.

He said his message to students is to challenge your fears.