Lafayette vs. Lehigh rivalry 150 years in the making 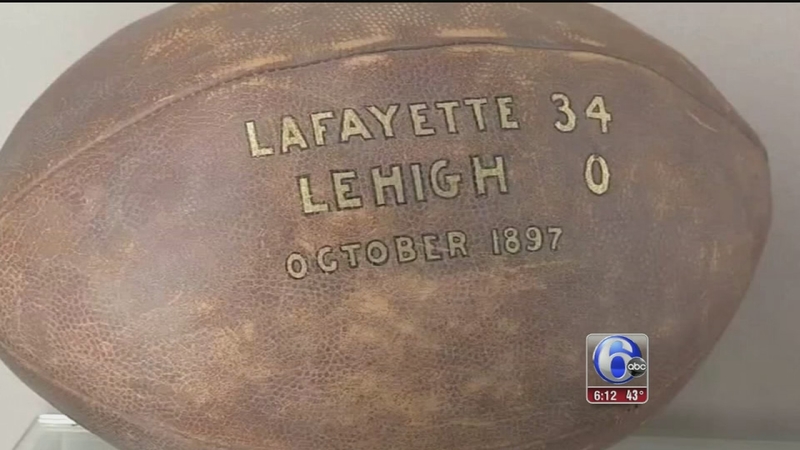 VIDEO: Lafayette vs. Lehigh rivalry 150 years in the making

EASTON, Pa. (WPVI) -- Lafayette vs. Lehigh is the biggest college football rivalry in the Lehigh Valley - dating back 150 years and both schools are pumped for Saturday's match-up.

"You come to Lafayette and I didn't apply to Lehigh but I hated them the moment I got my acceptance letter," said Alexandra Simels, Lafayette student.

Lehigh vs Lafayette - a rivalry that goes back to pretty much the dawn of American football - in1884, before helmets and the forward pass.

Since then, with only one exception, they have played at least once a year.

Students will tell you it's a rivalry that is alive and well in the 21st century.

"It's tremendous, its tradition. It's just such a part of the culture here," said Alyssa Finelli, Lafayette student.

"Oh were out for blood, that's what it is. It's a pretty big deal," said Alex Quow, Lehigh student.

Spirit week means days of wall-to-wall build up for the game.

From impromptu pep rallies to bed races - all in the service of revving up the fans of both schools.

On Thursday in Easton, students left behind maroon hand prints with a message.

Saturday will be the 150th time the two squads play.

To mark that, the game will be at Yankee Stadium in the Bronx.

"It's going to be nuts. Everyone is going to be there - people that graduated years ago, everyone is coming," said Katheran Senopoulos, Lafayette student.