Veterans Runs A Thousand Miles to Honor Other Soldiers 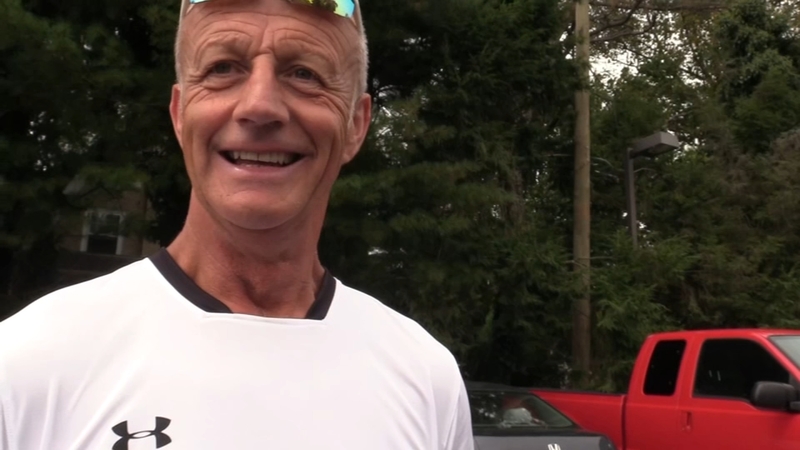 Veterans Runs A Thousand Miles to Honor Other Soldiers

You would pass him in a split second in traffic, but his setup is enough to get you to turn your head, and his story is enough to make an officer offer an escort.

"Well when I found out what he was doing and the cause he was doing it for, I myself felt some obligation to him," explained Lt. Thomas McDonald of the Montgomery County Sheriff's Department, who accompanied Lance Corporal Justin Rowe for part of his journey.

Rowe is a British Army veteran and retired firefighter. He is also running a thousand miles to raise money for his friends hurt in the line of duty. "I've got friends who have mental or physical injuries, so it's like a brotherhood," said Rowe.

He started his run in the beginning of August in Maine and he's going to the US Marine Corps Memorial in Washington D.C. All he's brought with him is a wagon full of supplies and the company he's met along the way.

"I'm conditioned to run 20 up to 30 miles now," he said. Rowe is doing about a marathon every single day. Every few miles, he runs into a red truck. His friend, and fellow firefighter Randy Broadwater is inside cheering him on. For Randy, it's all about that brotherhood.

"I can be 3,000 miles from home, walk up to a door, and I'll have an instant bond with whoever opens that door," said Broadwater, who's the deputy fire chief at Hockessin Fire Company in Delaware.

Rowe has about nine days and 200 miles until he gets to his actual finish line, but he says each mile is a small price to pay for his brothers. "You know I go through seven hours of pain every morning, but at the end of it, it's nothing to what some of the veterans go through," he said.
Report a correction or typo
Related topics:
societypennsylvania newsmilitary
Copyright © 2022 WPVI-TV. All Rights Reserved.
TOP STORIES
Sharon Hill Council votes to fire officers charged in fatal shooting
Company that opened Philly pop-up Covid testing site facing lawsuit
Man arrested after firing 8 shots at Philadelphia officers
Red Cross in critical need of blood. Here's how to help
Man turns art into profession after football career abruptly ends
Man charged with murder in deadly Old City pipe beating
Stranded driver gets help from Washington Twp. police officers
Show More
South Jersey house fire leaves woman dead
Missing mother last seen the day her roommate was murdered
Montco restaurant can reopen as officials investigate Hep A outbreak
CPSC issues warning on infant loungers
Fairmount fire survivors describe terrifying scene, last-minute escape
More TOP STORIES News