'Laura Sims Skate House': 1st ice skating rink built in the US for an urban community continues its journey in West Philadelphia 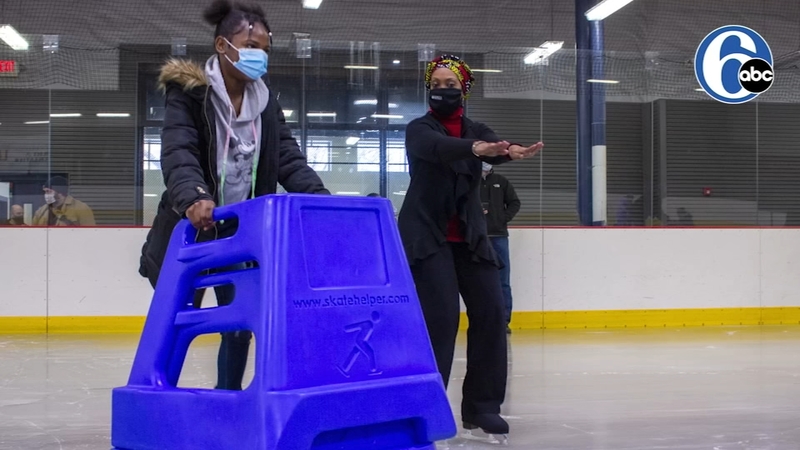 PHILADELPHIA (WPVI) -- In West Philadelphia, there's a bit of history at the Laura Sims Skate House on the Cobbs Creek Parkway.

This 36-year-old building shares a special journey that expands much further than ice skating.

"When the rink originally opened, it was called the 'Cobbs Creek Skate House and Cobbs Creek Parkway,'" said Cassandra Campbell-Ukaha, who is the assistant recreation leader at Laura Simms Skate House. "Now it's named after Laura Sims, who fought hard to get this skating rink here. She wanted African-American children to be able to enjoy the sport of ice skating, without having to travel way out of their neighborhoods."

Laura Sims, a community leader, launched the concept for placing an ice rink in the Cobbs Creek community in 1971.

Campbell-Ukaha has been with the staff for 24 years and says the rink is like a family.

Built in 1985, it was the first U.S. ice skating rink built by and for a Black community.

The designer was an African-American architect named Theodore R. Capers, who helped turned this dream into a reality.

The rink has built strong relationships, including Jimi Lewis and Joey Jones, who have connected through the rink and have since viewed themselves as father and son.

"I found out that they were building this rink from a member who worked for The City of Philadelphia," said Lewis. "She called me because I taught her children at the University of Pennsylvania. She said that they were building it in our neighborhood. I came on my bike, and I stood at the end of the rink where the walls weren't completed and watched them build this rink."

Lewis is a professional ice skating instructor and has spent more than 60 years teaching the sport.

During one of his private instruction classes at the University of Pennsylvania, is where he met Joey Jones and migrated more permanently to teaching in his neighborhood.

"We have several hockey teams that come out of this rink. Some of the kids find their way here. It's been a boon to the neighborhood to give them something interesting to do other than just playing basketball or football," said Lewis. "It's something different to do."

Jones, who is now transitioning more into a professional instructor role, has participated in many professional events, including entertainment ones like Disney on ice.

"I started living in a homeless shelter then began going to the ice rink," said Joey Jones, who is a professional ice skater. "That started at the University of Pennsylvania, and then I found out here was a little cheaper, closer to home, and more affordable."

Jones shares how growing up as a kid in West Philly, he was able to find his passion through the opportunities presented at the rink.

"They gave me the opportunity to pursue something that I enjoy, and I've now made it not just a hoppy but a career out of it," Jones added.

State representative Joanna McClinton encourages all parents to take advantage of this historic hidden gem in The City of Brotherly Love.