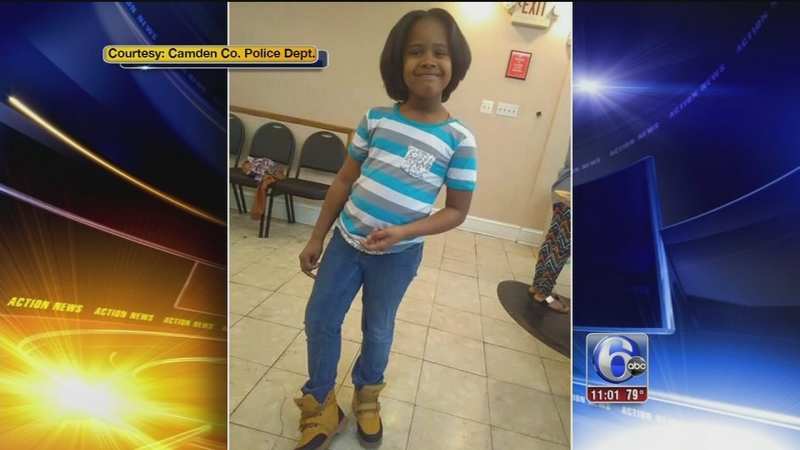 CAMDEN (WPVI) -- The babysitter of an 8-year-old girl who was critically injured in a Camden shooting was inconsolable Thursday as she described the moments after the gunfire.

"It was horrifying. I've never seen nothing like this before," Evinea Hall.

Evinea Hall was in her home on South 8th Street when suddenly she heard a loud pounding at the door.

"Her mom was banging on our door. I came out after the gunshots. I went over there to the baby. She was slumped and halfway inside the house. But...I don't know," Hall said.

It happened shortly after 8:30 p.m. Wednesday at South 8th Street and Cherry.

Police say the child, Gabrielle Carter, was caught in the crossfire while sitting on the porch.

Police are investigating the shooting of a child in Camden.

The unforgettable and heartbreaking image of the young mother holding her critically injured daughter brought Hall to tears.

"The lady across the street was supposed to have been watching her from what I hear. I heard someone ran in the house and left the baby outside. They saved themselves and didn't even try to help the baby," Hall said.

The Camden County Prosecutor's Office and police are offering a $6,000 reward to anyone with information that'll lead to an arrest and conviction.

"I reassured the mother that we are putting all of our resources to get the people that did this and hold them responsible and provide her some sense of justice in this act that's absolutely incomprehensible," Camden County Police Chief Scott Thomson said.

"I just hope they catch them. It's wrong, y'all need to turn yourselves in," Hall said.

Not only is it all hands on deck to find the suspects, but it's all hands on deck with community support for the victim. Balloons can be seen on street signs, and outside her home, more balloons and signs. Kids in this neighborhood who don't even know her showed up to wish her well.

Outside Cooper University hospital, friends of the young victim and her family met to show solidarity.

"Please know that you have a support team," said Nam Nelson, family friend.

As she continues to cling to life, they're asking for a stop to the violence on Camden streets.

"The leaders that you see here are going to remain here, and we're going to make sure that we together form to where we are going to change our city," said one supporter.

Flyers have been handed to seemingly everyone, but no word of any suspects at this time.

Police say they do have part of the shooting incident on surveillance video, but they are not going to release that footage at this time.