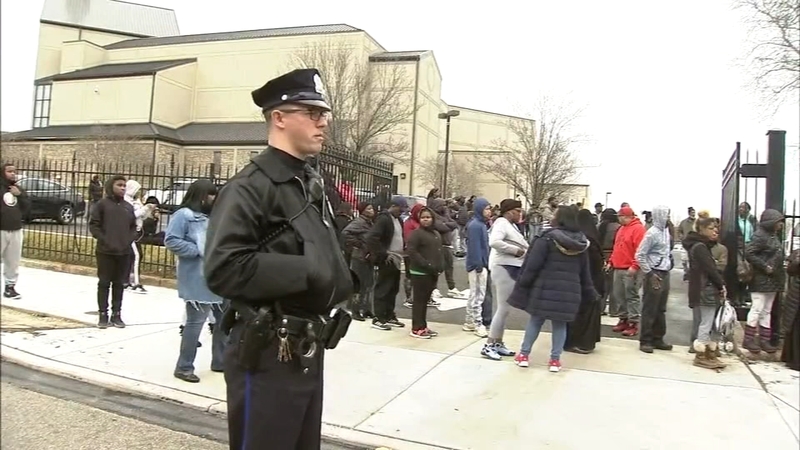 PHILADELPHIA (WPVI) -- The lockdown at a Philadelphia middle school has been lifted after an extensive search by police recovered a BB gun on school property.

Students at the Wagner Middle School in West Oak Lane were dismissed at noon Friday. The early dismissal was previously scheduled, leading into the President's Day holiday weekend.

It was a peaceful end to a tense morning at the school, which is located in the 1700 block of Chelten Avenue.

Action News is told police were called before 9 a.m. Friday, after a female student told the principal she thought she saw a male student with a gun inside the school.

The principal called 911 and the school was immediately placed on lockdown.

Watch video from Chopper 6 after police converged on the Wagner School in West Oak Lane on February 16, 2018.

The search continued past 11 a.m.

"Of course because of the tragedy that happened in Florida the other day... this is something that we take seriously. We always take this seriously," a Philadelphia police officer told Action News outside the school. "And it looks like things have worked. We always say, 'If you see something, say something.' Well, a student did that this morning."

Officials finally emerged just before noon saying that the search was complete. Police did recover a BB gun. There was no immediate word if any students had been taken into custody.

Watch video from the Action Cam outside the Wagner Middle School after a lockdown was ordered on February 16, 2018.

Police said at no point were students in any immediate danger and no injuries were reported.

Several dozen parents who had gathered nervously outside the facility through the morning expressed relief that the incident ended peacefully.