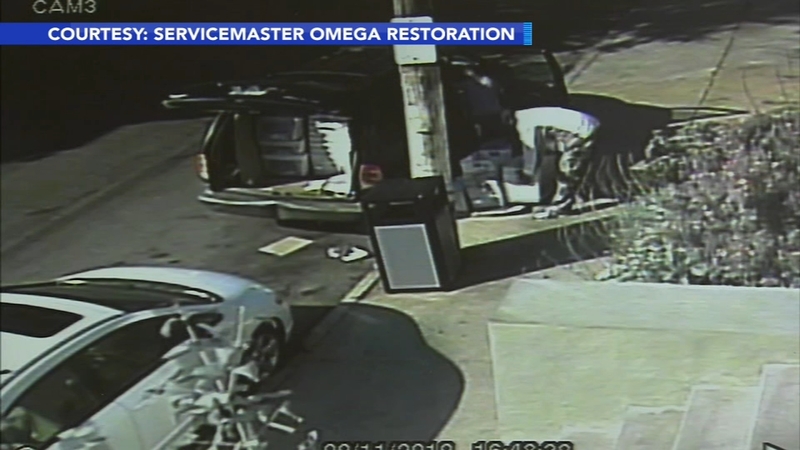 PHILADELPHIA (WPVI) -- A federal investigation is underway into why dozens of U.S. Postal Service bins, some full of mail, were dumped onto the side of a Philadelphia street.

In a video first obtained by Action News, two men could be seen pulling up to 6th and Wingohocking streets in Hunting Park around 4:30 p.m. Wednesday.

A federal investigation is underway on why dozens of U.S. Postal Service bins, some full of mail, were dumped onto the side of a Philadelphia street.

They get out of their vehicle and proceed to open the trunk where the bins were being kept.

The two men proceed to remove the bins and place them on the sidewalk. It took them more than two minutes to take out all the bins.

"When the camera started ringing and making all kinds of noises we were alerted to some kind of activity out front," said James Smith, an employee with the business that owns the surveillance cameras.
Smith said he was surprised at the pair's lack of awareness of their surroundings.

"I just can't believe that number one, they didn't notice these three cameras out front," said Smith.

But he was more shocked by the brazenness of the pair.

"Number two, they had the audacity just to dump it. Schools are getting out. People are walking back and forth and he just nonchalantly just dumped it. It's terrible," Smith said.

"The packages and property you saw discarded on the side of the road were picked up from the main post office in Philadelphia and given to an independent contractor," Sylvester said.

He added that the mail was no longer under federal regulation once the contractor picked up the items for delivery.

Sylvester said some of the mail was opened but the suspects didn't take any of it.

"There were other things that could've been taken that were not and that's why we believe the van was possibly the main target," he said.

After the suspects left the scene, attorney Jamiee Hatcher later noticed some of the mail was addressed to different sections of Philadelphia.

"That's why we contacted the post office to let them know," Hatcher said.

She said she even stopped someone else from taking a couple of bins.

Later that night, an Action News photographer stumbled upon the bizarre scene while covering an unrelated story.

Officers and postal crews could be seen picking up and sorting through the scattered mail that littered the street.

Some of the mail had already been opened. Inside the bins were bills, school report cards, packages, and small boxes.

"I pray they get to where they belong. I know we're always looking to have our mail delivered to us in a timely fashion," Hatcher said.

Sylvester said the postal service will make sure the mail gets back to the contractor to be delivered to the rightful owners.