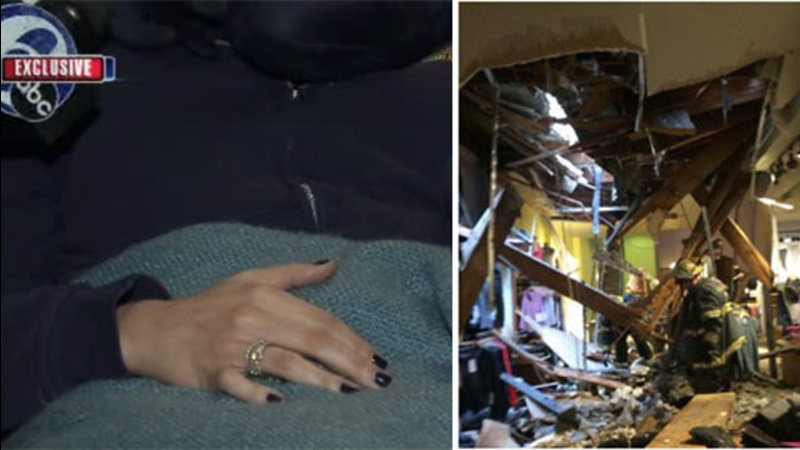 PHILADELPHIA (WPVI) -- A day after three people were injured when bricks fell through the roof of the Lululemon Athletica apparel store in Center City, one of the victims is speaking out exclusively to Action News.

"I thought I was going to die - like I thought that my life was over," said the victim.

The 27-year-old asked that we not share her identity.

The woman told Action News exclusively that she and the other two victims, who are also 27, are all friends.

They met up for some shopping but minutes later, they heard a noise.

"I think we heard the noise again but by that point, the ceiling had just collapsed," she said.

Action News has learned that it was a 30 foot long section of wall 15 bricks high with a stone cap that fell from the building next door onto the roof of the clothing store below.

For standard sized bricks that's about a ton and half of material.

Eight employees and five customers were inside at the time. The victim and her two friends were injured.

"I was kind of stuck under some of the rubble and screaming for help. I saw my two friends, they were able to walk away. They tried to come back and help me," said the victim.

The rest of the incident is a blur for the South Philadelphia charter school teacher as firefighters carried her and the other victims out on stretchers.

All three women suffered concussions and a number of other injuries.

Those bricks fell from 1529 Walnut onto Lululemon. On Wednesday, city inspectors and privately-hired engineers were on the scene throughout the day securing the wall.

L&I officials says it appears ice and wind caused the bricks to loosen on the nearly 90-year-old building.

This victim didn't want to discuss the investigation. She says she is still in shock that she almost lost her life while shopping for a head band.

"We're all really, really emotional and really shaken up but we're all lucky to be here, it could have been a lot worse," said the victim.

We are told it could take weeks or more for the victims to recover from their injuries.

Meanwhile, for the first time Lululemon is speaking out saying its primary concern is for the safety and well-being of its employees and customers.

L&I says on Thursday, the wall for 1529 Walnut will be secured using temporary steel bracing.

No word yet on when the building was last inspected and what, if any, maintenance has been performed on the parapet wall over the years.

The building has been cited for violations four times since 2006 under the previous owner. But L&I says none of the violations were structural.