"It's not bad": Neighbors say Made in America didn't leave behind much mess 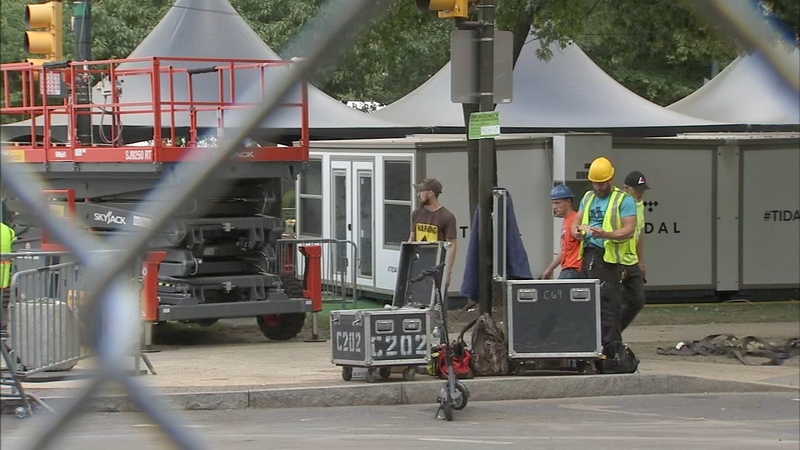 Neighbors: Made in America didn't leave behind much mess

PHILADELPHIA (WPVI) -- After the made in America festival brought about 50,000 people to Center City Philadelphia over the weekend, the only people who remained by Monday were cleanup crews.

As she walked her dog in the area along the Ben Franklin Parkway, Autumn Harris noticed that there wasn't very much trash.

"I think it looks great," she said.

After a weekend-long party, residents thought they'd wake up to a mess on Monday.

But the 8th annual Made in America Festival managed to be a great party without a lot of trash... or drama.

Police only had two arrests and only issued about two dozen citations for minor offenses.

"The police were out in force all night," said Harris. "They were all through the park and really kept a close eye on things."

Cleanup crews didn't waste time getting to work. They started Sunday night after the last concert.

By Monday morning a lot of the trash was gone, but barricades remained in place as crews broke down stages and tents.

For some, their biggest headache was re-routing their morning jogs and dog walks around the cleanup. But they didn't seem to mind.

"We got some extra steps on the FitBit," said Susan Whitcomb as she walked her dog. "And hopefully they clean up the neighborhood so everyone can be happy."
Report a correction or typo
Related topics:
arts & entertainmentcenter city philadelphiaphiladelphia newsmade in america
Copyright © 2022 WPVI-TV. All Rights Reserved.
TOP STORIES
1 dead, 4 injured after driver crashes into utility pole in Montco
AccuWeather: Clipper system to bring snow showers to parts of region
Fire on roof sends smoke billowing over Center City
Fauci optimistic omicron will peak in February
Gamers raise thousands for CHOP during 24-hour marathon
5 tax changes that can boost your refund this year
Former CHOP patient becomes nurse at new King of Prussia hospital
Show More
Woman says someone followed her in Center City using Apple AirTag
Family demands justice after 23-year-old woman found dead after date
How to order your free COVID tests from the government
How a 73-year-old grandmother outwitted a scam artist
FBI issues new warning on QR codes
More TOP STORIES News