KGO-TV reports, officers say they responded to a store on Turk Street in San Francisco on Saturday around 11:45 p.m.

When they arrived, they discovered the suspect and female victim had fled the scene.

Officials say a preliminary investigation revealed that the two were having an argument in the store when the suspect threw canned goods at the woman.

Next, they say the suspect grabbed the victim's 4-month-old cocker spaniel from the arms of another person and "forcefully slammed the puppy on the floor of the store."

Officers say they found the victim and her puppy, named "Prince," near Turk and Taylor streets. The puppy later died at San Francisco Animal Care and Control.

According to officials, Gallon has a prior arrest for firearms violations and should be considered dangerous.

Police advise that anyone who sees the suspect should call 911 and be prepared to provide Gallon's current location and description. Anyone with information on this incident should contact investigators via the SFPD 24 hour tip line at (415) 575-4444, or Text a Tip to TIP411 and begin the text message with SFPD. Callers may remain anonymous. 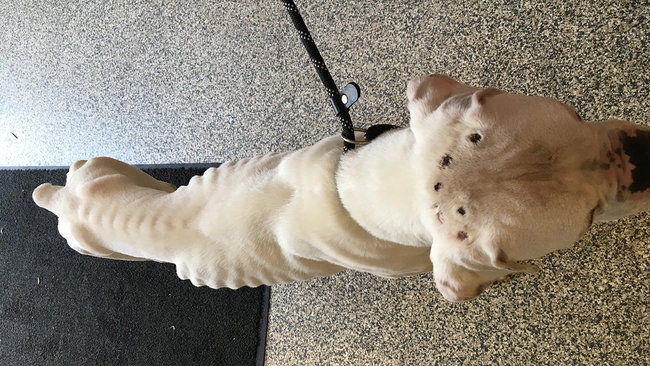 Malnourished dog with burn marks on its head abandoned in NY