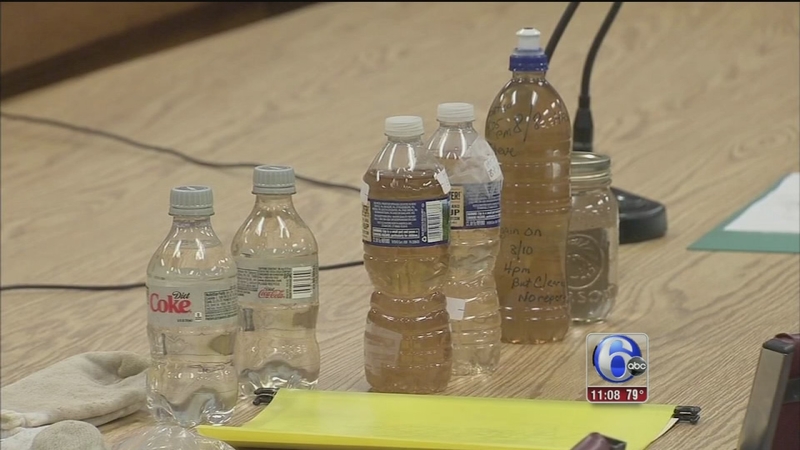 MAPLE SHADE, N.J. (WPVI) -- More than 100 people packed a Maple Shade Township meeting Thursday, a number of them bringing containers of filthy-colored water they say has been coming out of their faucets.

"We drink this water, it's a problem," said Brenda Brennan of Maple Shade.

"This needs to be totally investigated and taken care of. There's no good way to do anything except take care of the pipes and take care of the water system," said Anne Flynn of Maple Shade.

Officials were blaming the problem on an aging water pipe system - a problem they say is common with many other municipalities across the country.

Still, they assured residents the water was not harmful and the discoloration was being caused by iron that becomes dislodged from the cast iron pipes.

"Iron is not considered something that would typically cause cancer or other significant health concerns," said Dave Dedian, Aria Water Systems.

One resident says it appears the problem has also been seen in other parts of Burlington County.

"It's been happening in Moorestown for a few years. I have a lot of friends in Moorestown and got together," said Raj Bath of Maple Shade.

Residents were being urged to let their water run for a while until the water clears up, but some say sometimes it takes significant periods of time.

"I can tell you I flushed my line for over three hours when this happened last week and it was still brown - three hours," said Joe Walters of Maple Shade.

"It doesn't help the town when people consider moving to Maple Shade and they hear about these types of issues," said Walters.

Township officials say they themselves are not immune from the problem and realize it needs to be addressed.

"I can promise you we're going to get to the bottom of it, we're gonna find out what it is," said Deputy Mayor Nelson West. "I can't promise you when it's gonna be fixed."