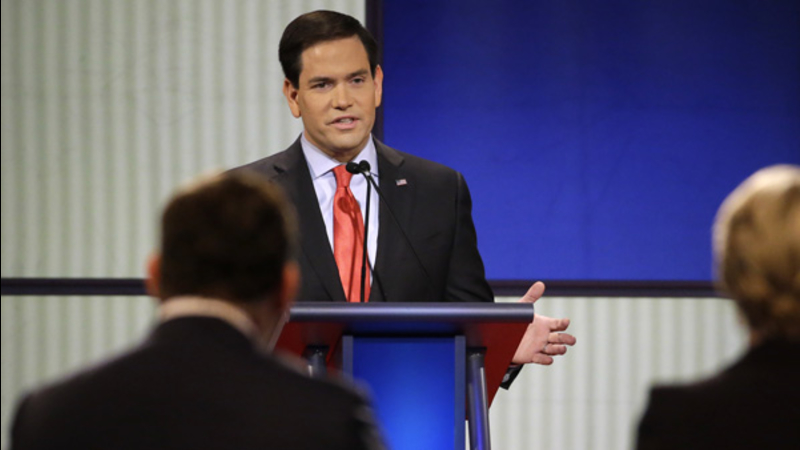 The presidential candidate was asked by moderator Megyn Kelly about his call for the closings of mosques to stop radical Islam.

When questioned whether that stance goes against the First Amendment, Rubio responded radical Muslims and radical Islam is "not just hate talk, it's hate action."

Philadelphia Police Officer Jesse Hartnett was ambushed and shot three times in the left arm while on patrol on January 7th in West Philadelphia.

Hartnett was able to get out of his car and fire back at the attacker.

30-year-old Edward Archer of Yeadon, Pa. was charged with attempted murder, aggravated assault and assault of a law enforcement officer.

According to police, Archer confessed to the crime, saying he did it "in the name of Islam."

A week after the incident, FBI Director James Comey said the agency found no indication Archer was part of an organized terror cell.

During a press briefing on January 11, White House Press Secretary Josh Earnest said reports lead them to worry the Philadelphia attack could be an act of terrorism.

"There obviously is keen interest in trying to understand what may have motivated this individual to carry out this deplorable act of violence. It is relevant whether or not this individual was motivated by demons inside his own mind or by demons he encountered through social media. Either way, we want to make sure we are mindful of the steps that we can take to mitigate the risks that is posed by this individual or others like him across the country. Certainly, one thing we can do is to keep guns out of the hands of people like him," Earnest said.

The FBI believed Archer traveled to Saudi Arabia in 2011 and to Egypt in 2012 and is probing the purpose of those trips.

Comey declined at the time to say whether Archer had been radicalized.