There's no obligation in the masking order for a student to produce a doctor's note or other supporting medical documentation.
WPVI 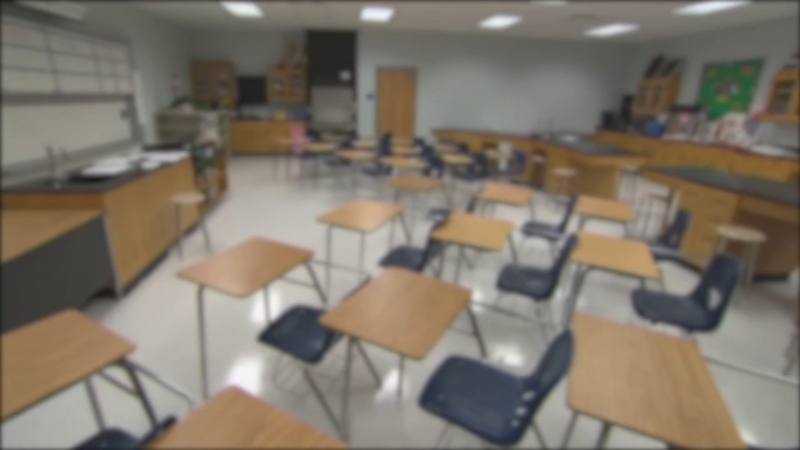 Central Bucks to comply with Pa.'s mask mandate in schools

HARRISBURG, Pennsylvania (WPVI) -- An apparent loophole in Pennsylvania's mask mandate for schools is making it easier for some students to go to class without having to cover their faces, even as state education regulators sought to make an example of one openly defiant school board.

The state health secretary's order requiring masks to be worn inside K-12 school and child care facilities, which took effect Tuesday, includes an exemption for students who claim it would cause or worsen a medical condition.

But there's no obligation in the masking order for a student to produce a doctor's note or other supporting medical documentation. Now some school boards that oppose the statewide mandate - or that have gotten an earful from parents - are allowing students to go unmasked with just a parent's signature.

Spot checks by The Associated Press of about 50 school districts on Thursday revealed at least a dozen around the state - from huge suburban school systems outside Philadelphia to rural districts in the west - are using exemption forms that don't require a medical professional's signature, making it easy for parents to opt out on behalf of their children.

Boards "need to make local decisions as to what is best, and those local decisions should give as much power to parents as possible," said Eric Winter, an attorney who has been advising parents and individual school board members. "This is a way to give them the control to do it."

The Wolf administration flatly rejected that approach. The Health Department said in a lengthy statement to AP late Thursday that "any district doing this is not in compliance." It said districts should determine eligibility in accordance with federal disability laws and require the same medical documentation they would normally require.

"There are exceptions to the masking order, but a parent's opposition to the order is not one of them," the statement said.

During its Aug. 31 board meeting, Central Bucks School District approved revisions to its health and safety plan based on the state's mandate while saying those who seek an exemption need only a parent's signature. "Individuals who wish to request a mask exemption must carefully review and submit the Central Bucks School District's face covering exemption form," the district website reads.

While most districts are complying with the letter of the mask mandate, the Tamaqua Area School Board in Schuylkill County is openly flouting it by keeping face coverings optional.

The board's recalcitrance brought a stern rebuke from state regulators.

Noe Ortega, the state education secretary, warned of various consequences if Tamaqua board members do not reverse course and require students to be masked. They could face fines, civil lawsuits, canceled liability insurance policies and even referral to federal civil rights enforcers, said Ortega, who accused Tamaqua of "flagrantly violating" the masking order.

Ortega's letter to the board, dated Sept. 8, was obtained by The Associated Press on Thursday. The district's solicitor declined comment. A message was sent to the school board president seeking comment.

Tamaqua is the only district to have received such a letter, said Kendall Alexander, spokesperson for the state Education Department.

Democratic Gov. Tom Wolf said last week that a universal, statewide order was necessary to help combat a statewide surge in COVID-19 cases, hospitalizations and deaths. He said most of the state's 500 school districts had not imposed their own mask mandates.

But requiring children to mask up in school - for a second academic year - has stoked fierce debate. Some parents argue masks are necessary to help tamp down spread and keep schools open for in-person learning. Others contend masks make it hard for their children to breathe and are tantamount to child abuse, and say the decision is theirs alone to make.

In the Hollidaysburg Area School District in Blair County, whose board voted Wednesday night to use an exemption form that requires only a parent's signature, parents demanded flexibility on masking.

"This may be our last chance to stop what seems to be a never-ending obsession to force masks on our children," resident Steve Link told the board members.

Sheryl Imler, a retired elementary teacher who taught in the district more than 30 years, argued that masks are a "small sacrifice" to help control the coronavirus.

"I'm disturbed by the number of people willing to falsify a form simply to get their child out of wearing a mask," said Imler, now a substitute teacher. "You're telling your child it's OK to lie about something if you don't like what the rules say."

The Central York School Board, which has expressed staunch opposition to the statewide masking order, offers parents a simple Google form for exemptions. "The board believes that school districts should be locally controlled and that parents are the best judge of their childrens' medical and mental well-being," the board said.

Nearly identical language was used by some of the other districts that are giving parents the right to assert medical exemptions without a doctor's sign-off.

Olivia Pituch, 17, a senior at Central York School District, said most students are not masking up. In her homeroom, she was one of only two students wearing a mask this week.

She wasn't happy about it.

"I want to get rid of the pandemic as much as anyone, and in my opinion, the best way to ensure the pandemic ... gets pushed down to a very manageable level" is by mandating masks, Pituch said in a phone interview. "I feel like it should definitely be necessary unless you have a doctor's note saying otherwise."

The medical exemption provision in the Health Department's masking order is similar to the one that was in effect for the 2020-21 school year. But masking in schools was not the highly contentious issue it is now. In York County, a hotbed of anti-mask sentiment, the South Western School Board abruptly adjourned an emergency meeting on masking Wednesday night after audience members refused to cover their faces. Board members left the stage as parents yelled and shouted.

Easier-to-obtain exemptions do not necessarily translate into mask avoidance. Laurel School District in Lawrence County does not require a doctor's note, but Superintendent Leonard Rich said Thursday the statewide mandate has greatly increased mask wearing in his schools to perhaps 75%. "Prior to the (Health Department) order, masks were virtually nonexistent," he said.