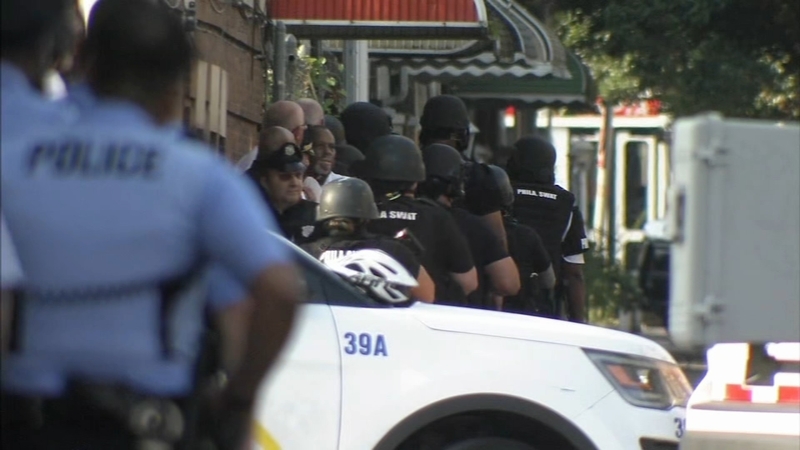 PHILADELPHIA (WPVI) -- Jennifer Walker didn't know what to do when she heard gunshots right after getting her son out of the car in front of her home still on North 15th Street Wednesday afternoon.

Walker lives across the street and a few houses down from the home where police were engaged in a standoff with a man suspected of shooting six officers after they tried to serve an arrest warrant. She was not allowed to leave her house until after midnight when the suspect surrender to police.

Robert Harris watched it all unfold from the news stand he works at just two blocks away.

"(Police) did an excellent job. They did that to the letter," he said. "They were ultra professional."

Police didn't get that same appreciation from everyone in the neighborhood. A viral video shows a crowd surrounding police during the standoff. People in the crowd were yelling and throwing objects at police. One woman pushed an officer. Some say Wednesday's event caused neighborhood tension to overflow.

"(Police) were screaming and hollering and being nasty. Some of them not all of them," said Naomi Pettit who's toddler was One of the children holed up inside the daycare on the block with a standoff was happening.

She says she had to wait for three hours to get her child and that the school updated parents as fast as they could on the children's safety.

Six police officers were injured in the shooting. Residents like Dwight Nelson, Jr., are expressing their gratitude for the job that police did. His restaurant, Dwight's BBQ, is giving discounts to all police officers as a show of appreciation.

"It's just good to know that they are being brave and they're putting their lives on the line to make sure that people like me can come into work and bring their families in and be OK," he said.
Report a correction or typo
Related topics:
north philadelphiaphiladelphia newsshootingpolice officer shot
Copyright © 2022 WPVI-TV. All Rights Reserved.
TOP STORIES
AccuWeather Alert: Rain To Snow This Morning
Messy morning commute expected in Philly region ahead of snow
Police, SWAT called to multiple barricade incidents in Philly
School Closings
Find out which schools are closed in your district.
Check School Closings and Delays
Woman beaten to death with 2 pipes inside office building
Police: Gunman arrested after holding teen hostage during standoff
Show More
Woman stuck in bathroom for days gets saved by neighbor
House on the move left on Jersey Shore street for the night
Cardi B offers to pay for funerals of all 17 Bronx fire victims
Health department issues new COVID-19 guidance for Philly schools
Embiid ties career high with 50 points, 76ers beat Magic
More TOP STORIES News