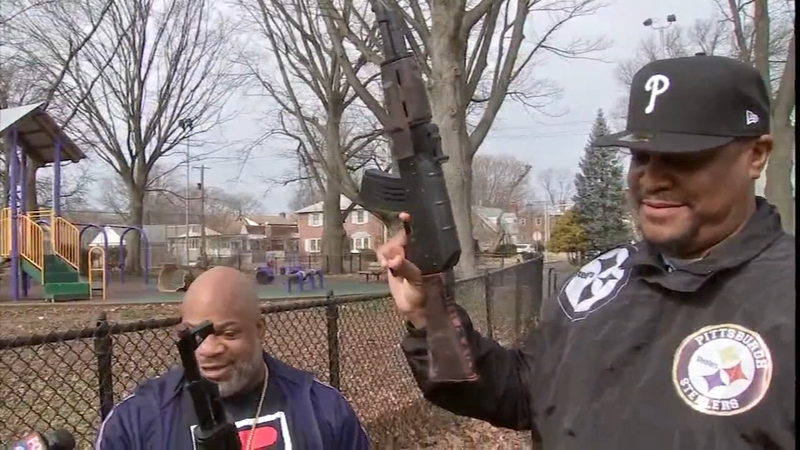 PHILADELPHIA (WPVI) -- Philadelphia police released a video that appears to show a group of people, armed with guns, breaking into the Sturgis Recreation Center to shoot a music video. But the men involved with the video shoot say the guns are not real.

It happened last Thursday before the center in the city's East Oak Lane neighborhood was open to the public.

Police said a woman was able to gain access into the building and a short time later a group of men appeared in a white minivan.

According to investigators, the group stayed at the rec center for more than two hours, shooting some sort of music video.

Police have released surveillance video of this man and others for bringing alleged semi-automatic rifles to a rec center, to shoot a video. Dj Greg Nice says the guns are fake and they weren’t trying to harm anyone. https://t.co/Jd7KNQnTP5 pic.twitter.com/zxBO4Sw8nC

On Tuesday, Action News spoke with two of the people involved in the video. They say the guns are fake, but acknowledge the fact that they did not get permission to use the rec center for the video shoot.

"They are not real," one man said. "The mistake that we made was not getting permission to shoot the video."

The man said next time he would ask the rec center ahead of time and urged the community that the building is safe.

Dj Greg Nice said the guns were purchased from a party store.

Officials with Philadelphia Parks & Recreation department released a statement that said in part, "Assault weapons - real or replica - have no place in a recreation center, which is a safe haven where children come to learn and play."

Philadelphia police have not confirmed if the fake guns were the ones used in the video.