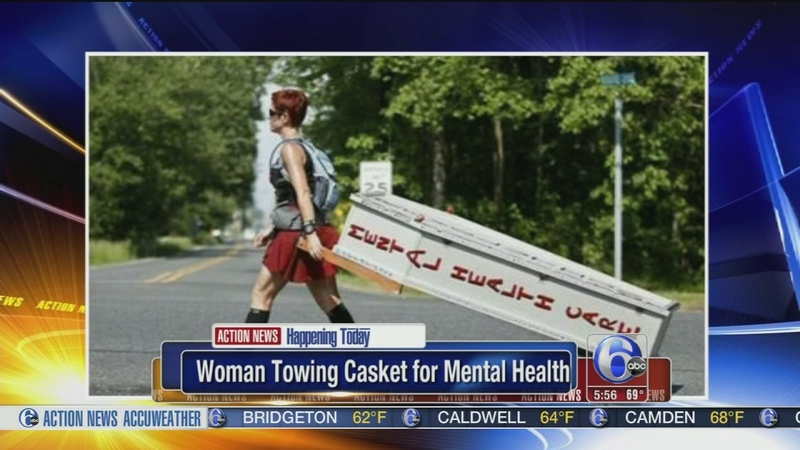 TRENTON, N.J. -- A South Jersey woman is walking 80 miles while pulling a casket from her home to the state Capitol in Trenton to raise awareness of mental health issues, including suicide and addiction.

Greta Schwartz set out on her three-leg journey Monday and plans to arrive Wednesday.

The 48-year-old has a backpack of water and is storing food in the wooden casket she is pulling behind her with a strap fastened to her waist. 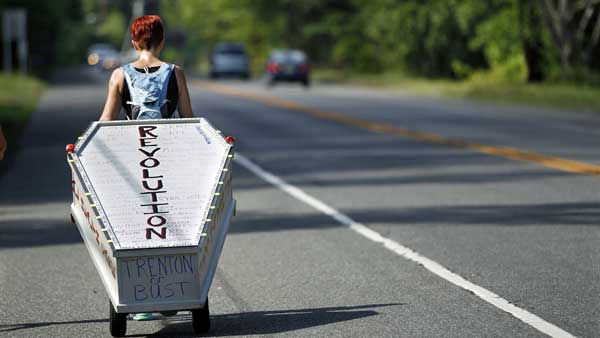 PHOTOS: NJ woman pulls casket for miles for mental health awareness
A New Jersey woman is walking 80 miles while pulling a casket from her home to the state Capitol to raise awareness of mental health issues, including suicide and addiction.

The casket has the word "revolution" printed on its lid. It also bears the names of about 70 people to whom Schwartz had a personal connection who have killed themselves. It has two wheels at the narrow end to help Schwartz pull it.

"I can't just sit around," she said. "This is happening. I have over 70 names. That's just people I have a connection with. Not even strangers."

She said her son knew two students at Ocean City High School who killed themselves in 2014 and 2015.

About a dozen people came out of their homes along a residential stretch during her walk, shared their stories involving suicide and wrote their loved ones' names on the casket, she said.

"It's really just unbelievable," said Schwartz, whose feet are blistered after the first 40 or so miles.

Schwartz, who owns the Red Sky Cafe in Seaville, put her theatrical experience as a former actor in New York City to work after attending a discussion on mental health from former Rhode Island U.S. Rep. Patrick Kennedy, who spoke in November at Stockton University.

Kennedy, the son of late Massachusetts U.S. Sen. Ted Kennedy, now lives in Brigantine and has been a political advocate for mental health issues.

Schwartz said Kennedy told the audience the only way to make a change was to be loud.

"I'm not a professional in the field. I'm just a mom with experience," Schwartz said. "So my goal in this is to use this election year to really get people to talk about it."

Schwartz walked from Seaville to Hammonton on Monday and was headed from Hammonton to Mount Holly on Tuesday. She'll set out Wednesday for Trenton.

Suicide is the 10th-leading cause of death in the U.S., according to the American Foundation for Suicide Prevention.