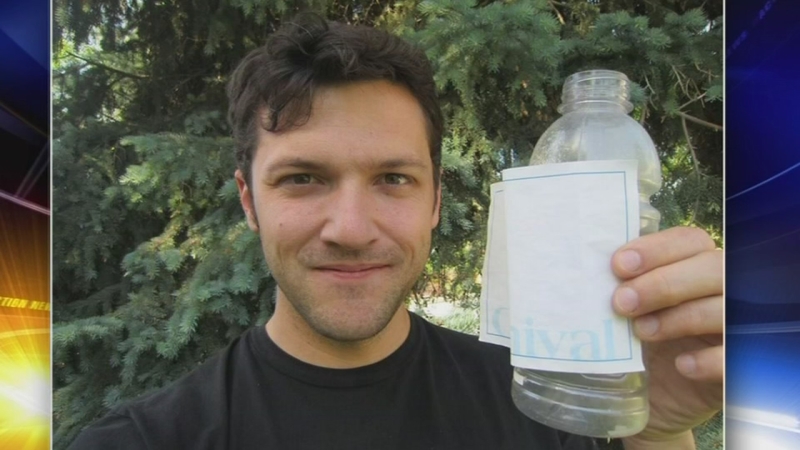 PHILADELPHIA (WPVI) -- A man from Utah is on a mission.

He's trying to find a guy in Philadelphia named Ray who left a left a message in a bottle.

He's hoping the two can connect, and maybe even become friends.

"It sounds crazy I know, but it's kind of a hobby of mine," said Clint Buffington from Salt Lake City.

Believe it not, he travels the world looking for messages in bottles.

"And it seemed like magic to me. I didn't know that messages in bottles were real. I thought it was just something that you see in movies or books or whatever," said Buffington.

Since he started on this crazy fad of his in 2007, he has found 82 bottles with messages in them.

"I've now met with like 11 people whose messages in bottles I have found, and every experience has been really wonderful," said Buffington.

And it was back in 2015, while vacationing in the British West Indies, that he stumbled unto a Gatorade bottle that had washed ashore with a very faded message inside. It was very hard to read.

"If I hold it up to the light just right, a really specific angle, I can see where he's written, 'I live in Philadelphia, let me know what day you found this,' " said Buffington.

The message was written by someone named Ray from Philadelphia. It was written on a cruise line stationery, saying he was on a Carnival Conquest Cruise in May 2014.

"I'm really excited to find Ray. I hope that we're able to make contact, and I hope he's as interested in meeting as I am," said Buffington.

Unfortunately, he can't make out Ray's phone number on the message. He's been looking for him over a year now. For Buffington, there's something magical about connecting with the people whose message in a bottle he has found through the years.

"I don't know, I just felt like kinda connected to the people on the other end, and I made contact with them, and they were super excited that I found their bottle. It just kinda hooked me, it appealed to me somehow," said Buffington.

So Ray from Philadelphia, if you're out there, Clint Buffington is looking for you.