4 arrested in connection with overdose death of 'The Wire' actor Michael K. Williams 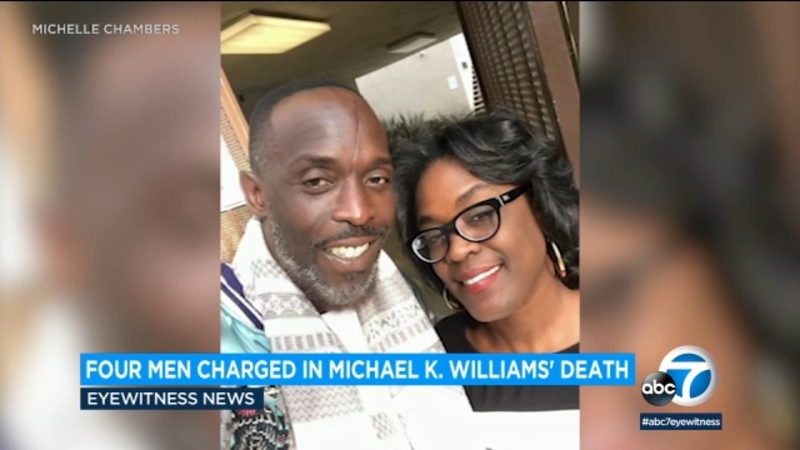 4 arrested in connection with overdose death of Michael K. Williams

WILLIAMSBURG, Brooklyn -- Four people have been arrested in connection to the death of "The Wire" actor Michael K. Williams in September.

Three of the defendants made a court appearance on Wednesday and a fourth was arrested in Puerto Rico and will appear in court there Thursday.

Irving Cartagena, 39, stands charged with narcotics conspiracy after prosecutors said he distributed the heroin that resulted in Williams' death. Hector Robles, 57, Luis Cruz, 56, and Carlos Macci, 70, were charged as members of the alleged conspiracy.

According to court documents, on or about Sept. 5, 2021, the defendants sold Williams the heroin, which was laced with fentanyl and a fentanyl analogue, with Cartagena executing the hand-to-hand transaction.

The 54-year-old Williams, best known for his role as Omar Little on HBO's "The Wire," was found dead the next day by family members in his Brooklyn penthouse apartment.

An autopsy later confirmed that Williams died as a result of using fentanyl-laced heroin.

An actor best known for his work on "The Wire" was found dead in his penthouse apartment in Brooklyn on Monday.

Despite knowing that Williams died after being sold their product, officials say the four continued to sell fentanyl-laced heroin, in broad daylight, amidst residential apartment buildings in Brooklyn and Manhattan.

"Michael K. Williams, a prominent actor and producer, tragically overdosed in his New York City apartment from fentanyl-laced heroin," said U.S. Attorney Damian Williams. "Today, along with our law enforcement partners at the NYPD, we announce the arrests of members of a drug crew, including Irvin Cartagena, the man who we allege sold the deadly dose of drugs to Michael K. Williams."

"This is a public health crisis. And it has to stop. Deadly opioids like fentanyl and heroin don't care about who you are or what you've accomplished. They just feed addiction and lead to tragedy."

Williams had previously been open about his battle with drug addiction and called it an everyday struggle.

"A lot of people think that when a person puts down the drugs or the alcohol that all the problems go away," he once said. "That couldn't be further from the truth. Drugs and alcohol are not the problem. They are merely symptoms of the problem."

The video in the media player above was from a previous report.