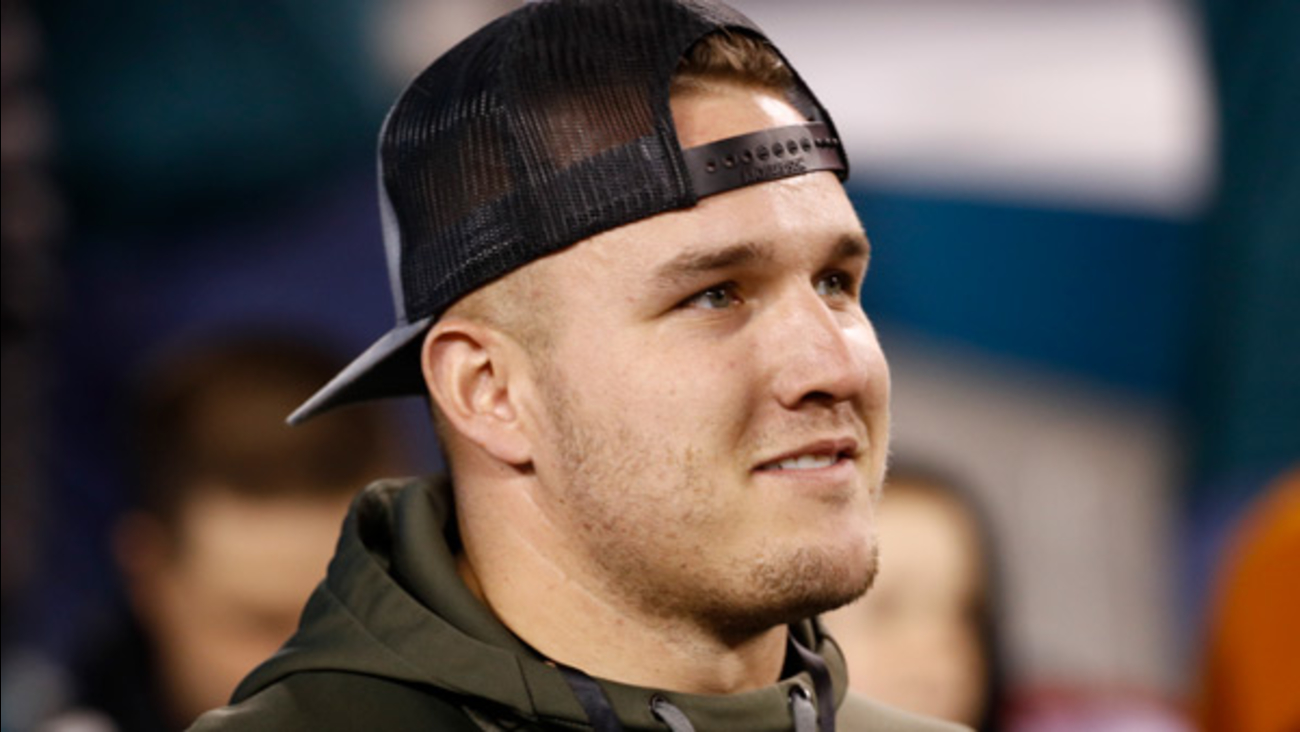 Mike Trout, the best player in baseball and a devout Philadelphia sports fan, revealed the depth of his love for the Eagles on Sunday when he wore a dog mask to the team's 38-7 victory over the Minnesota Vikings in the NFC Championship Game at Lincoln Financial Field.

Now the mask has come off -- and the gloves along with it. Trout has yet to decide if he will attend Super Bowl LII on Feb. 4 in Minneapolis or watch it on television. But when the game is over, he expects the Eagles to be celebrating a victory over the favored New England Patriots.

"It's going to be tough,'' Trout said Tuesday. "Obviously, I wish the best to anybody that goes up against Tom Brady. He's the greatest of all time. But I still think the Eagles are going to pull it out. I think they're going to win 31-24, on a late interception (off) Brady.''

Trout, 26, a six-time All-Star and two-time MVP for the Los Angeles Angels, grew up 50 minutes from Philadelphia in Millville, New Jersey, and has fond memories of attending Eagles games at Veterans Stadium with his father, Jeff. He was 13 years old when Donovan McNabb and the Eagles lost 24-21 to Brady and the Patriots in Super Bowl XXXIX.

Over the past two years, Trout has developed a close friendship with Eagles quarterback Carson Wentz. The star athletes bonded over a hunting trip in December 2016, and Wentz and Eagles tight end Zach Ertz have since been spotted giving Trout souvenir footballs in the stands after touchdowns.

Trout's passion for the Eagles prompted media members throughout the country to call the Angels in search of interviews this week. The team's media relations department arranged a conference call Tuesday, and about 50 reporters called in and spoke to Trout for more than 20 minutes.

"As soon as the Vikings and Eagles won, I shot him a text and said, 'Hey man, do you wanna fly out? I've got an extra ticket,''' Trout said. "The first drive of the game, when they scored a touchdown, I said, 'We're in trouble.' Then after the Eagles scored a couple of touchdowns, he started to get quiet. It was so loud and electric at the end of the game, he started chanting the Eagles chant. I think I turned him into an Eagles fan.''

Skaags declined to stray from his support of the Vikings in a text message Tuesday. But he did concede that "the Linc was an incredible atmosphere,'' and "it was nice to meet Wentz.''

"Obviously, they're going to get a bad rap,'' Trout said. "They're crazy for their sports teams. They love their teams. It was crazy up there after the Eagles won, with all the fireworks and people high-fiving. They're just really dedicated to their teams. It doesn't matter what team it is. They're just die-hard fans.''

While Philadelphians can take heart in Trout's endorsement of the Eagles, he declined to make the declaration that the city's sports fans most want to hear. He's owed $99.75 million over the three years left on his contract with the Angels, and he dismissed the notion that his support of Philadelphia sports reflects a desire to return East and play for the Phillies one day.