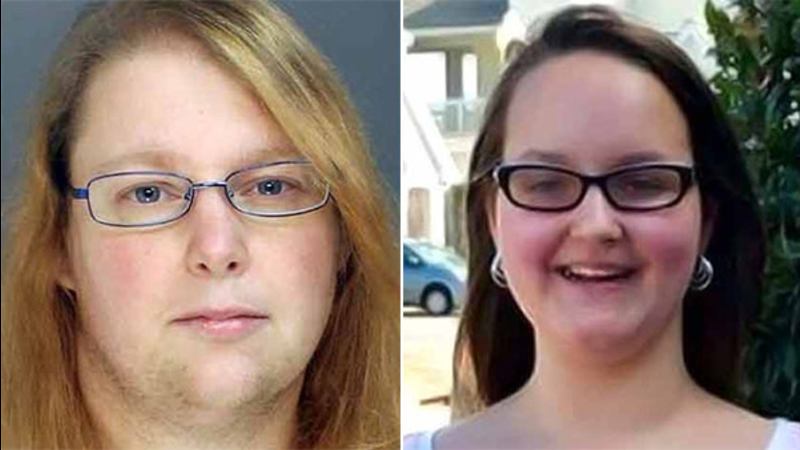 DOYLESTOWN, Pa. (WPVI) -- A woman accused of killing and dismembering her adoptive daughter pleaded not guilty during a court hearing in Bucks County on Friday.

Forty-two-year-old Sara Packer is charged with homicide, kidnapping, abuse of a corpse, and conspiracy to commit rape in last year's death of 14-year-old Grace Packer.

Sara Packer was bundled in a blanket when she was arrested in early January. On Friday she wore an orange prison jumpsuit when she was formally arraigned, and told that prosecutors may go for the death penalty if she is convicted of the killing of her adopted daughter last summer.

"Obviously, the facts are terrible. But we are obligated to look at this with a legal perspective, and in this case we felt that at least we had to give the defendant notice that we could potentially seek the ultimate penalty in this case," said Bucks County District Attorney Matt Weintraub.

On March 31st Packer's boyfriend, Jacob Sullivan, will face a similar hearing. Together they are accused of killing and dismembering Grace in July, then reported the girl missing, claiming she was a runaway.

In January, court record show Sullivan confessed to raping and killing Grace, eventually dumping her body in a wooded area in Luzerne County where it was found in late October.

Packer's lawyer, Keith Williams, entered a not guilty plea on her behalf Friday and started to shape his defense strategy.

"Certainly, the allegations in this case are very serious and horrific. But I would point out what we've said from the beginning - we don't believe that there will ever be any evidence that my client killed anybody," said Williams.

Sara Packer is now off suicide watch, but she remains in isolation from the general population at the Bucks County prison.

"I can only say that she's holding up as good as one could expect under these horrible circumstances," said Williams.

Packer's lawyer said he may try to have this trial taken out of Bucks County, or bring in an out of town jury.

Sara Packer wore orange jumpsuit, was in cuffs. She remained reserved, answering "yes, Your Honor" or "no, Your Honor" to judge's questions.

Sara Packer's attorney said she is off suicide watch but remains in isolation.

Paperwork filed today in Sara Packer case preserves right for prosecutors to seek death penalty, but decision hasn't been made yet.