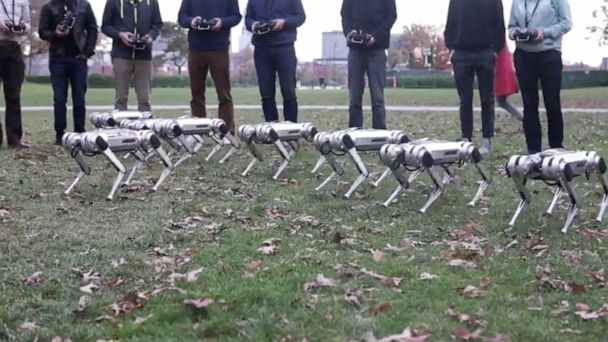 Massachusetts Institute of Technology's (MIT) simultaneously cute and unsettling "back-flipping" robot dogs enjoyed some time outside this fall, frolicking in the fallen leaves and playing a friendly soccer match.

Dubbed the "mini cheetah robots," the dog-like bots made headlines earlier this year when MIT announced they were the first four-legged robots that could do a backflip.

The robots weigh-in at just 20 pounds, but has been described by researchers as virtually indestructible.

"A big part of why we built this robot is that it makes it so easy to experiment and just try crazy things, because the robot is super robust and doesn't break easily, and if it does break, it's easy and not very expensive to fix," lead developer Benjamin Katz, a technical associate in MIT's Department of Mechanical Engineering, said in a statement in March.

In the new video, a pack of nine of the four-legged robots can be seen scurrying about the Killian Court on MIT's campus, as well as kicking and chasing around a soccer ball that is almost as big as them.

They also show off some synchronized turns, flips and more impressive gymnastics -- including their famous 360-degree backflips.

"The rate at which it can change forces on the ground is really fast," Katz added. "When it's running, its feet are only on the ground for something like 150 milliseconds at a time, during which a computer tells it to increase the force on the foot, then change it to balance, and then decrease that force really fast to lift up."

"So it can do really dynamic stuff, like jump in the air with every step, or run with two feet on the ground at a time," he added. "Most robots aren't capable of doing this, so move much slower."
Report a correction or typo
Related topics:
abc newsnational
Copyright © 2020 ABC News Internet Ventures.
More Videos
From CNN Newsource affiliates
TOP STORIES