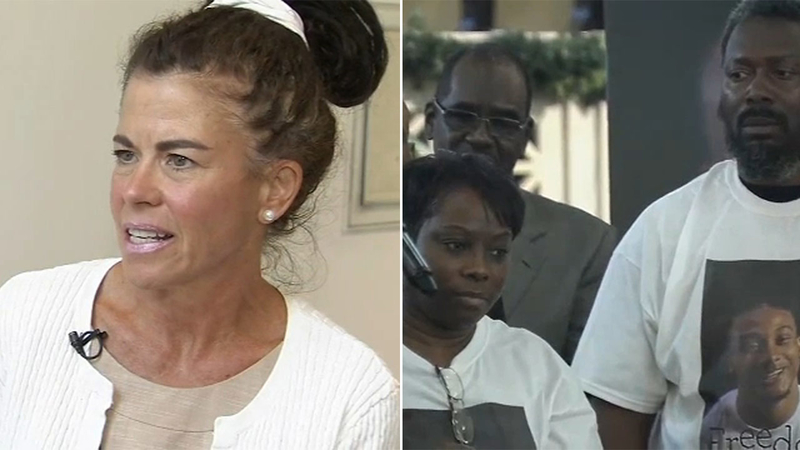 PHILADELPHIA (WPVI) -- The mother of a Philadelphia real estate developer killed during a confrontation near Rittenhouse Square is speaking out publicly before Wednesday's preliminary hearing, as the family of the suspect says it was an act of self-defense.

Linda Schellenger sees this as a tragedy for two families.

"Two sons were lost. It's a tragedy," she said. "I mean, I am a mother who lost her son. I will never see him again. Another mother has lost her son unfortunately in this situation."

Thirty-seven-year-old Sean Schellenger was stabbed to death on July 12.

"I've lost a son forever. I will never speak to him again," said Schellenger. "So I just want people to recognize the impact of that and have some kindness and compassion for each other."

On Tuesday night, a vigil was held at True Gospel Tabernacle Family Church for the suspect, 20-year-old Michael White. His family joined in prayer and song, calling the killing a case of self-defense.

Supporters are praying White will be released on bail.

Bishop Ernest McNear said they are hearing charges will be reduced. He said the district attorney assured them that the first degree murder charge would be downgraded to manslaughter. The district attorney's office has not publicly commented on these statements.

"It was important for this young man to have spiritual support and his family because black men are disproportionately incarcerated, and this particular situation has questions," said McNear.

White surrendered a day after the crime. He was on a bicycle delivering food when it is alleged he fatally stabbed Schellenger in the chest. Investigators have not released specifics on how the situation unfolded.

Linda Schellenger is concerned about speculation surrounding what happened and the divisiveness she sees arising from the case.

On Wednesday, White will appear in court for a preliminary hearing. A large group of his supporters are expected to be in attendance.

"We would like to see him home, on house arrest until the duration of this case," said White family spokesperson Greg Thompson. "He should not be incarcerated for what has happened to him."

Like Linda Schellenger, Thompson says he too is looking forward to the truth coming out. He just doesn't think that White should remain incarcerated during that process.