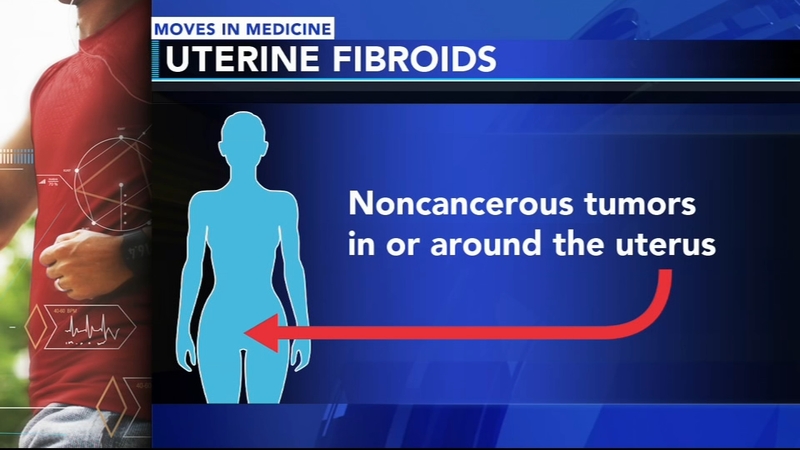 PHILADELPHIA (WPVI) -- Undergoing surgery is always a serious matter. In this week's Moves in Medicine, we learn how technology is reducing the risks and speeding the recovery for a common women's procedure.

"It started a few years ago with back pain and the heavy bleeding," explained Samaria Bey, of Philadelphia's Logan section.

Month by month, Bey's pain got worse until she could barely function. Tests showed uterine fibroids were the cause.

"Two really big ones that they could see on ultrasound," she said.

Fibroids are noncancerous tumors that develop in or around the uterus. Most women develop at least one during their childbearing years, but only half feel any symptoms.

Black women often get more and larger fibroids, and at a younger age. Birth control pills can temporarily reduce the size and discomfort. But with her children grown, and after exploring many other options, Bey opted for a minimally invasive hysterectomy at Temple Health.

"I think both healthcare providers and women alike aren't truly aware of just how much we can do minimally invasive," said Dr. Patricia Mattingly.

Drs. Mattingly and Isabel Eisner specialize in laparoscopic and robotic procedures. They believe about 80% of women facing gynecologic surgery are candidates for this approach.

"Robotic surgery allows us to do things that are generally more complicated, still in a minimally invasive fashion," said Eisner.

Bey said the doctors found even more fibroids during the surgery. She is now pain-free, with no regrets about her hysterectomy.

"It's the same thing like if you have an appendix that went bad, you take it out? Yes," said Bey.

Bey and her doctors said women facing gynecologic surgery should get a second opinion, and shop around for a surgical team they are comfortable with, just as they would looking for a new car or a home.
Report a correction or typo
Related topics:
health & fitnessphiladelphiamoves in medicine temple
Sponsored Content
Copyright © 2021 WPVI-TV. All Rights Reserved.