Multiple people arrested in deadly ambush of Americans in Mexico 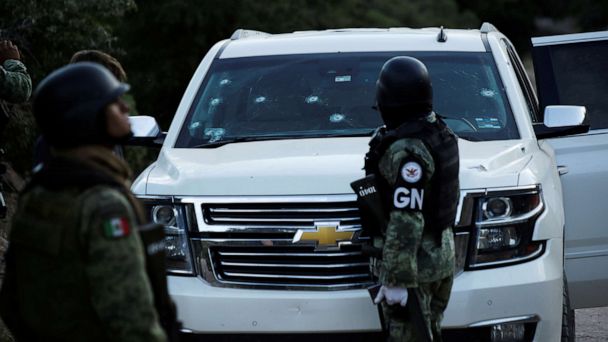 Mexican authorities announced Sunday they had arrested "several individuals" connected to the ambush and cold-blooded murders of nine U.S. citizens, including many young children, in Chihuahua state on Nov. 4.

The Attorney General's Office of the Republic (FGR) made the announcement in a press release, but offered few details as to who was arrested, or even how many.

"With the participation of the Mexican Army, the Mexican Navy, the Federal Ministerial Police of the Attorney General's Office, the National Guard and the National Intelligence Center, in the early hours of this day in a joint effort and fulfilling search warrants obtained by the FGR from a specialized judge, several individuals were arrested, allegedly involved in the events mentioned above," the office said in a statement, translated from Spanish.

The ambush took place as the group of Americans, all part of a splintered Mormon community called La Mora, in the Sonora state, traveled to Chihuahua state. The nine women and children who were killed were members of the LeBaron family, which splintered from the Church of Latter-day Saints church decades ago. They were traveling in three SUVs to a wedding in Chihuahua, about 100 miles south of the Arizona border.

Authorities believe the deaths were related to a fierce, ongoing battle over territory between two cartels in the region.

The Mexican Army and Federal Ministerial Police arrested an alleged participant last month and obtained search warrants Sunday, when they carried out the arrests of further suspects in the early morning hours, according to the Attorney General's Office.

The FBI is also involved in the investigation, and the Attorney's Office said it would be cooperating with the agency.

"When there will be more information, reliable and trustworthy, the general public will be immediately informed," the FGR said.

About a mile from another one of the vehicles, the bodies of Dawna Ray Langford and her two sons, 11-year-old Trevor Langford and 2-year-old Rogan Langford, were found shot to death, according to Mexican authorities.

Eight others were injured in the attack, including some children who were shot. Devin Langford, the 13-year-old son of Dawna Ray, walked 14 miles in the desert to get help for his injured relatives, the family said in an exclusive interview with ABC News last month.

"They just started hitting [the] car first, like with a bunch, a bunch of bullets. Just start shooting rapidly at us," Devin Langford said. "The car didn't work. So she was just trying right there, starting the car as much as she could, but I'm pretty sure they shot something so the car wouldn't even start."

Warring cartels have caused chaos in northern Mexico for years, but violence exploded again over the weekend with 20 people killed, according to authorities.

Fourteen gunmen and four police officers, as well as two civilians, were killed in a gun battle on Sunday against cartel forces in Coahuila state, not far from the Texas border.