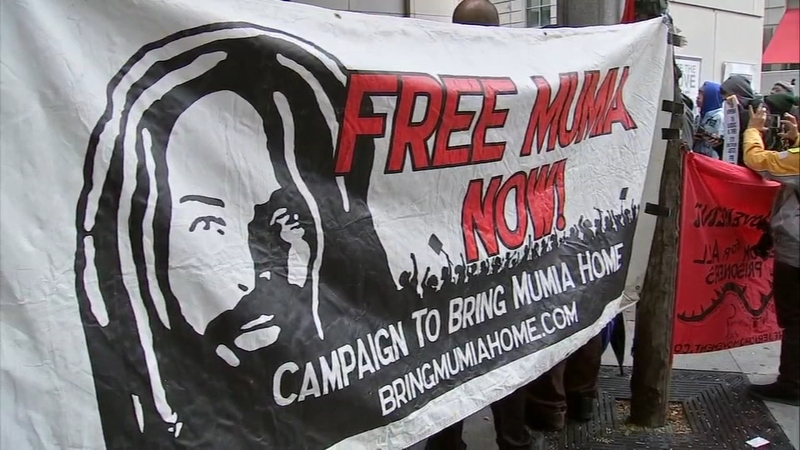 PHILADELPHIA (WPVI) -- The case of convicted cop killer Mumia Abu Jamal was back in court on Monday morning.

His attorneys were prepared to argue that conflicts of interest led to unfair rulings against him in the case.

Abu-Jamal was sentenced to death for the 1981 murder of Philadelphia police officer Daniel Faulkner, but his sentence was later commuted to life in prison without parole.

It was an emotional day both inside and outside of the courtroom.

Officer Faulkner's widow stood up and cried in the middle of court proceedings after the judge announced that both sides would have to wait until sometime in December for any possible closure in this case.

Abu Jamal's attorneys argued that their client's rights were violated after former district attorney Ron Castille failed to recuse himself in an appeals decision as a then-state Supreme Court judge.

"Justice Castille has shown himself to be involved in this case, to be biased against a certain class of cases that our client falls into," said defense attorney Judy Ritter.

The Commonwealth argues that as district attorney, Castille was simply doing his job.

"It's nothing remarkable that a DA would send a letter to the governor asking him to sign death warrants which the governor was required to do," said attorney Tracey Kavanaugh.

Faulkner's widow, Maureen, spoke after the hearing and said that she hoped today would bring closure to a wound that had been open for decades.

"I live in a mental prison. I have travelled all over the world - to Nepal - and have seen 'free Mumia Abu Jamal,'" Maureen Faulkner said.

The judge says he will make a ruling in the case sometime after December 3rd.