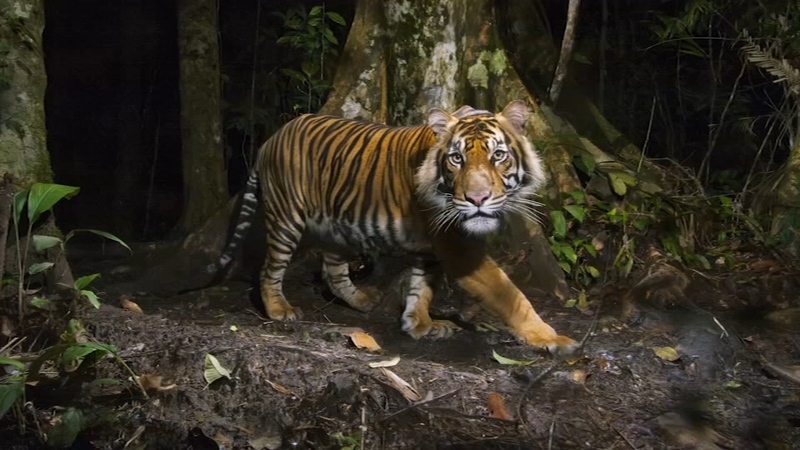 The Kimmel Center for the Performing Arts is bringing the pages of National Geographic magazine to life with a three-part series at the Merriam Theater.

National Geographic Live! takes audiences on a deep dive into the adventures of some of the magazine's most daring photographers.

"We bring three of their best-known and most praised photographers here to show their work," Kimmel Center Programming Director Fran Egler explains.

The three photographers focus their work on wildlife, outer space and the indigenous people and waterways of the Amazon, and their images are shown on a massive screen as big as the Merriam Theater's stage.

On Nov. 1, Egler says, photographer Steve Winter will take audiences into big cat habitats, "From snow leopards in Asia to tigers in India and lions and other large cats in Africa."

Winter will share his pictures and his stories, talking to the audience about the work involved in capturing his images.

"He'll be outside for hours upon hours and maybe even days just waiting for the cats to come," Egler says. "And you'll see this amazing shot, which maybe will last just a few seconds."

The series picks back up Jan. 17 with Terry Virts, an astronaut on the International Space Station.

"It's all views of basically outer space and also the Earth from above so amazing shots," Egler says.

The series concludes on May 16 with marine biologist and photographer Cristina Mittermeier. Her photographs of marine wildlife and natural habitats focus on the need for water conservation.

"Making sure that we're discovering how to basically preserve the world," Egler says.

For each show in the series, audiences are treated to stunning works from award-winning photographers and taken on a visual trip around the world and even out of this world.

"It's family-friendly. It's something for anyone who is a fan of the Earth," Egler says. "You can explore all these just by coming to the Merriam; you don't have to get a passport to do it."

This will be the first time the National Geographic Live! Speaker Series has made a stop in Philadelphia. You can buy tickets at Buy tickets


Kimmel Center Presents National Geographic Live!
Nov. 1 at 8 p.m.: On the Trail of Big Cats with Wildlife Photographer, Steve Winter
Jan. 17 at 8 p.m.: View From Above with NASA Astronaut, Terry Virts
May 6 at 8 p.m.: Standing at the Water's Edge with Marine Biologist and Photographer, Cristina Mittermeier