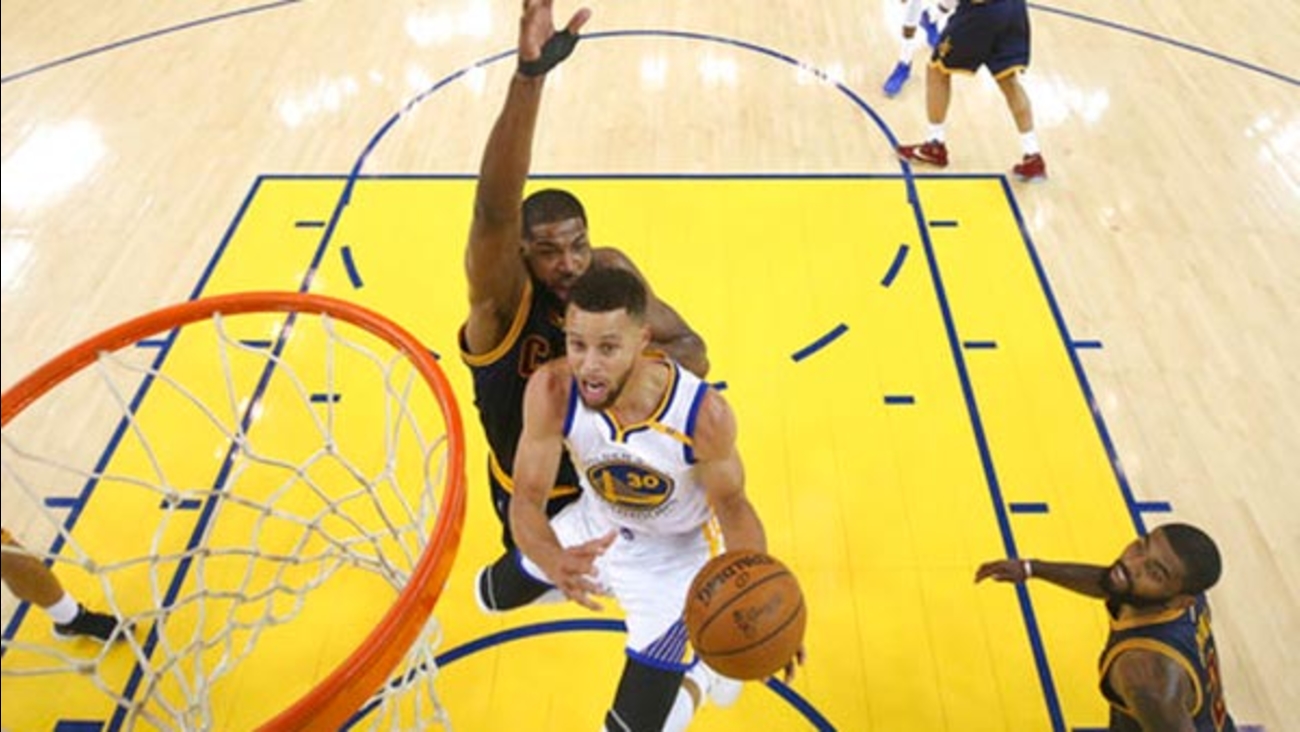 Golden State Warriors guard Stephen Curry (30) shoots against the Cleveland Cavaliers during the first half of Game 1 of basketball's NBA Finals in Oakland, Calif. (Ezra Shaw/Pool Photo via)

OAKLAND, Calif. -- Kevin Durant drove through the lane untouched for dazzling dunks. He dished off even when he could have slammed it home, and did it all on defense.

Oh, he hit from long range, too.

What a dominant NBA Finals opener with the Warriors.

"We could be a lot better than we were tonight but in the Finals you get a 'W,' we'll take it," Durant said.

James wound up with 28 points, 15 rebounds and eight assists a day after dealing with bigotry far away from basketball. Someone painted a racial slur - the N-word - on the gate of his Los Angeles home, leaving James to address racism rather than his seventh straight Finals appearance or stopping KD. James said he would do his best to be ready for the series opener when his mind was elsewhere, concerned for his wife and children back in Ohio.

Durant punished Cleveland for leaving him free, taking the ball to the hoop for emphatic dunks as a man on a mission to deliver exactly what he came for: a championship. He had six slams in the first half alone for the Warriors, who at 13-0 are already the first team to go this far in a postseason unblemished.

"They're the best I've ever seen," Cavs coach Tyronn Lue said. "They're 13-0, they're constantly breaking records every year."

Game 2 in the series is Sunday night back at Oracle Arena with its deafening sellout crowd.

"Those are two big household names, so we know you guys and the fans are going to want to see that and pick up on it," said acting Warriors coach Mike Brown, facing a Cleveland franchise that fired him not once but twice. "I'm sure LeBron probably thinks he could play better, and you tip your hat off to KD."

Kyrie Irving, who hit the deciding 3-pointer with Curry's hand in his face last June as Cleveland rallied from a 3-1 series deficit to win the city's first major team title in 52 years, scored 24 points on 10-of-22 shooting. Kevin Love grabbed 21 rebounds and scored 15 points, while Tristan Thompson was held scoreless and to four boards.

Durant's only other Finals ended at the hands of LeBron and Miami in 2012. He shot 14 for 26 in his fifth 30-point performance this postseason, receiving a rousing ovation when he sat down for good with 2:16 remaining.

Once his night was finally done, Durant found mother Wanda at the end of the Warriors bench and held her in a warm embrace.

Curry sported a fresh haircut for the occasion and the two-time reigning MVP initially wore a black sleeve on his shooting arm to protect a tender elbow that still had some swelling, but he quickly removed it and found his stroke. He shot 11 for 22, 6 of 11 on 3s.

This marks the first time in NBA history the same two teams played in three straight Finals and just the fourth time it has happened in the four major sports leagues.

The shooting was far from pretty, and Cleveland's defense was a step behind most of the night, unable to stop the star-studded roster of All-Stars and key role players on the other side. Golden State finally warmed up after nine days off, while the Cavs had a six-day break since beating Boston in the Eastern Conference finals.

Cavaliers: James' 3-pointer in the third quarter moved him past Reggie Miller (320) for second place on the NBA postseason list, which is led by Ray Allen with 385. ... Cleveland committed 12 of its 20 turnovers in the first half - "20 in the Finals is not going to get it done," Irving said.