NBA suspends season due to coronavirus 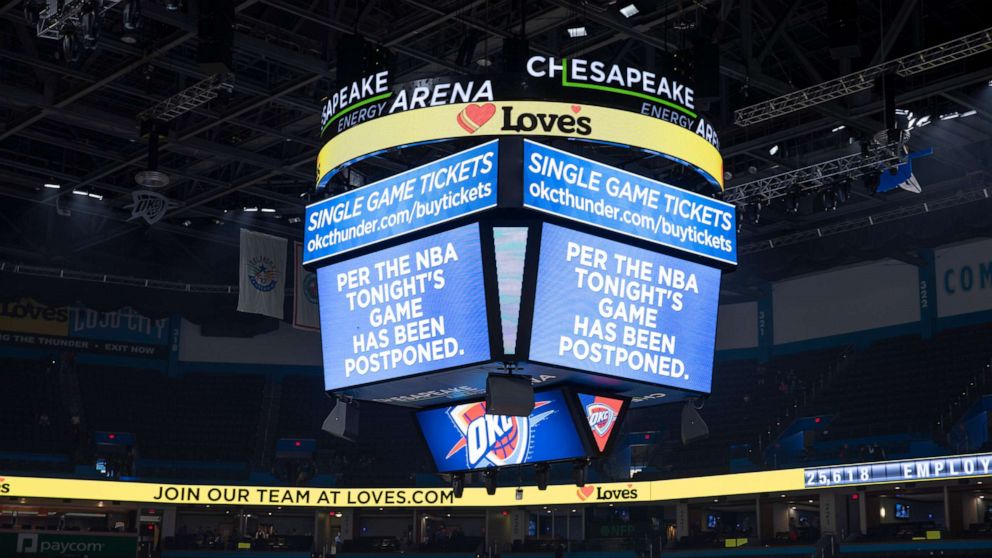 The NBA has suspended its season due to the novel coronavirus outbreak.

The announcement came after a confusing mid-game suspension of play between the Utah Jazz and Oklahoma City Thunder. The NBA announced a player tested positive for coronavirus, and said it will now be indefinitely halting games following Wednesday night's schedule.

"The NBA announced that a player on the Utah Jazz has preliminarily tested positive for COVID-19<' the league said in a statement. "The test result was reported shortly prior to the tip-off of tonight's game between the Jazz and Oklahoma City Thunder at Chesapeake Energy Arena. At that time, tonight's game was canceled. The affected player was not in the arena."

"The NBA is suspending game play following the conclusion of tonight's schedule of games until further notice," it added. "The NBA will use this hiatus to determine next steps for moving forward in regard to the coronavirus pandemic."

ESPN NBA reporter Adrian Wojnarowski reported Rudy Gobert was the player from the Jazz who tested positive. The center was an All Star for Utah in 2020.

The league had discussed playing games in empty arenas, a decision star LeBron James previously had spoken out against.

"Man we cancelling sporting events, school, office work, etc etc. What we really need to cancel is 2020!" James tweeted following the news of the league-wide suspension. "Damn it's been a rough 3 months. God bless and stay safe."

Likely future NBA Hall of Famer Vince Carter was planning to retire at the end of the season, which could mean his career abruptly ended Wednesday.

"I'm appreciative," Carter said, fighting back tears during a post-game press conference. "... The game's been good."

"Such a weird night but I am truly thankful for each and every person during this 22yr journey," Carter later tweeted. "If this is really it, I thank everyone for your love and support for all these years."

On Wednesday, Golden State Warriors guard Steph Curry responded to reports games at the Chase Center in San Francisco would be played without fans after the mayor banned gatherings over 1,000 people.

"Everything about our routines is reliant upon that kind of game day energy. Pulling up to the arena, seeing fans outside of Chase [Center] walking around in all the Warrior jerseys, even energy in the building, you can feel it all the way through the locker room, through the tunnel," Curry said at practice. "The only thing is try to have a conversation about how you raise your level of intensity from the jump because you don't have that actual adrenaline rush of playing in front of 18,000 people like that."

Most NBA teams had about 15 to 20 games left. The regular season was set to end April 15 with the playoffs to begin three days later.

The NCAA said earlier in the day that all of its basketball tournament games would be played without fans.