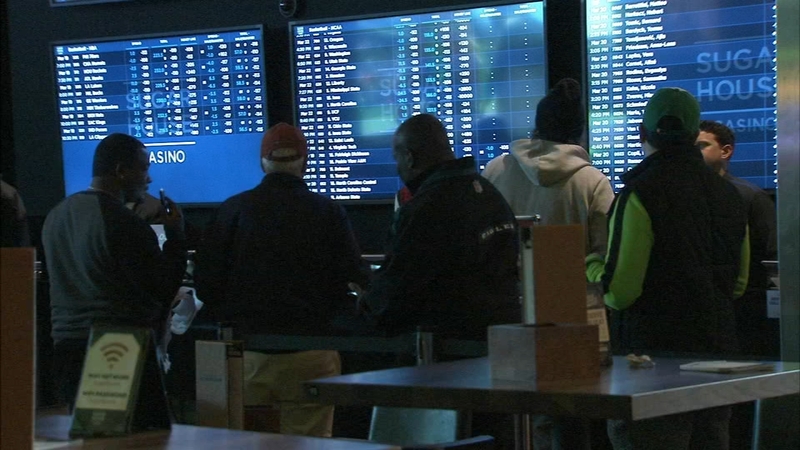 PHILADELPHIA -- This is the first March Madness that legal sports betting is allowed. Casinos throughout the Delaware Valley are hoping basketball fans bet on their brackets.

It was a steady stream of people coming in to the SugarHouse Sportsbook to place their bets on their teams.

"Hopefully my brackets stay within its range and hopefully my teams win. And Hopefully Vilgoesnova go all the way," said Isaiah Soto of Olney.

Mike Kane says, "I like 'Nova, 7-seed, 6 seed-good spot for them to pick up a couple upsets to get to the final rounds."

Others were keeping their bets close to the vest.

"Sometimes the best team ain't the best team. That's why they call it March Madness, I love this time of year," said Sunni Walls of Germantown.

Yes, after three and a half months of sports betting at the SugarHouse, the forecasts are looking sunny for March Madness.

"As we saw during the NFL Playoffs when the Eagles were on, we saw increased interests. With Temple and Villanova, I think we're gonna see that as well," said Evan Davis with SugarHouse Casino.

Sports betting during the Super bowl at the eight casinos in Pennsylvania netted $31.5 million. Online betting in Pennsylvania will soon be available but in New Jersey, where it already is, that state saw a whopping $320 million of online and sports book betting during the Super Bowl. Analysts say the sports betting forecast for New Jersey during March Madness is between $75 to 80 million.

"A lot of the estimates out there are putting Pennsylvania numbers anywhere between $10 and $15 million. But that could change if Villanova makes a run deep into the final four again," said Dr. Daniel Miles with Econsult Solutions, Inc.

"One of the things to keep in mind for Pennsylvania is there's only eight legal sports books currently in Pennsylvania and it's only been around for three and a half months. So Pennsylvania is still kind of in the ramp up period," Miles added.

The SugarHouse was number one for sports betting in Pennsylvania in January. They were beat out by Pittsburgh in February but still number one in Philadelphia. And they are excited here about what they will see during March Madness.
Report a correction or typo
TOP STORIES
AccuWeather Alert: Rain To Snow This Morning
Messy morning commute expected in Philly region ahead of snow
Police, SWAT called to multiple barricade incidents in Philly
School Closings
Find out which schools are closed in your district.
Check School Closings and Delays
Woman beaten to death with 2 pipes inside office building
Police: Gunman arrested after holding teen hostage during standoff
Show More
Woman stuck in bathroom for days gets saved by neighbor
House on the move left on Jersey Shore street for the night
Suspect captured in killing of woman, 24, working at furniture store
Cardi B offers to pay for funerals of all 17 Bronx fire victims
Health department issues new COVID-19 guidance for Philly schools
More TOP STORIES News